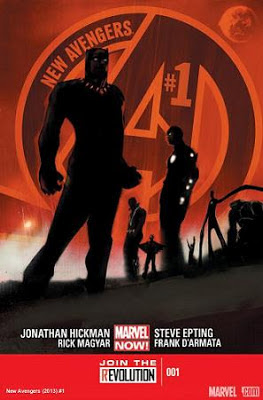 To prevent the collision of our universe with another, the Illuminati, led by the Black Panther, must assemble NOW! It’s the most powerful and brilliant team in the Marvel Universe--The Black Panther, Iron Man, Doctor Strange, Black Bolt, Mister Fantastic, Namor the Sub-Mariner and The Beast--against an infinite legion of parallel realities.

The last time Epting and Hickman were together they killed The Human Torch and redesigned the Fantastic Four, which divided comic fans down the middle.  Some thought it was a bold and successful move and others thought it was the worst thing to happen to the title.

While I thought that was a bold move, I didn't think it was 100% successful either.  That said, that story line has definitely put the pair in to the firing line of many fans so now a lot of eyes are on their relaunch of New Avengers.

Is this a bold and successful issue?

Well yes and no.  The story itself is good and not only has nods to the past stories featured in the title before but also has it's eyes firmly on the future.

The story is mainly one of The Black Panther and it's a story with a cracking pace and  some good revelations.  I really enjoyed the first page 'spoken' from the point of view of Mr Fantastic himself as I think that really set the scene for what is about to happen.

The art is pretty much the same as the story.  It's good but not great yet it solves the story itself well and really makes good use of the characters.  It seemed a little too 'busy' during the big battle scene but not to such a degree that it made it unreadable.  It just seemed a bit cluttered in those scenes.

While I admit I was expecting a little bit more from this title because of who was involved, it was still good enough to make me want to check out issue two so they were successful on that count.

All in all, a good but not essential issue.