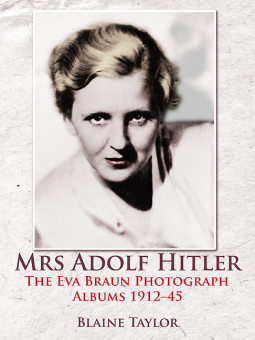 The year 2012 marks the centenary of Eva Braun's birth. This is the strange-but-true saga of her life, richly illustrated from her own personal photograph albums, as well as from other captured German archives.

She married German dictator Adolf Hitler but 36 hours before their joint suicides in Berlin on April 30 1945, in the last week of the Second World War in Europe.

This exciting pictorial biography tells the full story of a Catholic convent-bred young woman - not only as the secret mistress, as many historians have painted her since her voluntary death at age 33 - but also as Hitler's lawfully wedded wife, even though she is still largely referred to today by her maiden name. They met at a Munich photography shop in 1929 when she was but 17, and he was already 40.

The true nature of their long relationship is fully explained in detail for the very first time: she was heterosexual and he bisexual, but the author concludes Eva most likely remained a virgin until the day she died. Although many reports after the war claimed that he shot himself and that she took poison, the official Russian autopsy of their partially-burnt bodies asserted that both died by cyanide capsules, despite the postwar testimony of all Hitler's closest aides, lending even their deaths an air of mystery. Who was she, really?

The answers are here. This fascinating, gripping, and tragic story of a pretty, well-liked, middle-class shop girl is of a life mainly lived in the iron shadow of history. In death Eva Braun Hitler became - and remains today, a hundred years after her birth - one of the most famous women in all of world history, alongside such female luminaries as Joan of Arc, Jacqueline Kennedy Onassis, and Princess Diana. Eva has been a figure shrouded in controversy, misinformation, myth, and legend, until now.

At long last the veil is lifted, with over 300 photographs providing an extensive collection of imagery, including a number of contemporary colour shots. Eva Braun had a lifelong passion for photography - her close friends nicknamed her the 'Rolleiflex girl' after a camera model - and this is reflected in the array of imagery featured in this groundbreaking book.

I have long been interested in the 2nd World War from all sides of history and have always wondered what truly happened in that infamous bunker at the end of the war.

While there have been many books on the subject, most contradicting the others, I honestly don't think we will ever truly learn the truth.  This book offers that truth but does it succeed?

The book does succeed on quite a few levels.  There are a lot of photographs that I have ever seen before, which was a welcome surprise considering just how many books I've read on this side of the war.  The author also brings a lot of new information to the table as well and that really helps to round out Braun's character a lot more than other books that I have read.

However, there are a few flaws here and there.  One is that the book veers in to sensationalism at times with the authors writing coming across as melodramatic.  That really harms some of the book in that it reads more like a gossip magazine instead of a biographical look at one of the most famous, or infamous, women in history.

Another complaint is that every now and then the book seems to gloss over certain things in order to get to the 'juicy' parts of the story.  That kind of bugged me as a history fan because of the simple fact that it seemed to make the book look like the writer had a certain theory in mind and wouldn't stray at all from that point of view.

All in all, while this is a good look at the life and death of Eva Braun and has some really interesting pictures that have never been published before but that's harmed by some of the writing veering off in to melodramatic sensationalism.  That's a real shame because I had really high hopes for this one.  On the plus side however, there were quite a few tidbits of information that I hadn't known before so history  buffs might get a bit of a kick out of this release.

'Mrs Adolf Hitler: The Eva Braun Photograph Albums' is available from May 30th 2013