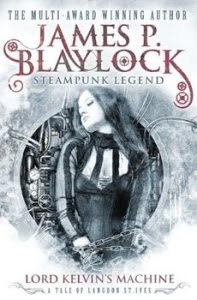 Determined to avert the doom of his beloved wife, scientist and detective Langdon St. Ives sees his only hope for doing so in Lord Kelvin's time machine, but the diabolical Dr. Ignacio Narbondo has other plans for the invention.

After reading 'The Aylesford Skull' I was really eager to read the other stories featuring the same characters that James P. Blaylock had written earlier in his career.

I know the novel 'Homunculus' was the first one but for some reason the storyline for this one just interested me more so I chose this one.

I have to admit that 'Lord Kelvin's Machine' is a much grittier novel than 'The Aylesford Skull'.  I know that in '...Skull' Langdon has his son kidnapped  by the nefarious Dr Narbondo but for the most part, he keeps himself intact.  In this one, that's not the case at all.  He falls to pieces, he makes bad decisions and in some parts, he goes all out crazy because of the things that Narbondo does to him.

Told in an episodic nature, I can see why that would put some readers off but I actually found that to be quite a fresh and interesting way of telling this time travel story.  One of the best parts of the book was when the story was told from Langdon's man servant.  I liked how the story took on a whole new life when told from his point of view.

One of the down parts of this book was that even though it was based around time travel, which is an exciting concept on it's own, yet here it just doesn't come across as such.  The time travel part of the story is an important part of the novel and is used well on an emotional front because of Langdon needing to prevent his wife's death yet on a pure and utter excitement front, it just didn't have the 'wow I have to read until I finish the whole story' feel that 'The Aylesford Skull' had.

While this is a very good story for the most part, some of it did feel a little like Blaylock was running out of ideas and was just coasting along until he hit the next big scene.  That's a real shame after reading the brilliant 'The Aylesford Skull' but hey, they can't all be brilliant.  The novel is still worth picking up however just to see how different this 'going crazy' version of Langdon is.