Iron Man: The Coming of the Melter Review 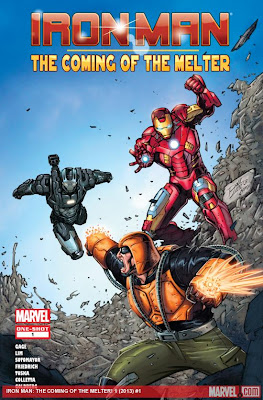 Iron Man meets his match with the Malevolent Melter!With technology similar to Iron Man’s, will the Melter bring the downfall of Stark Industries?

It’s a battle of wits and might with Iron Man and War Machine leading the charge!

Relive an old battle between Iron Man and the Melter in the classic reprinting of Iron Man #72!

To be honest, other than a attempt to cash in on the release of the 'Iron Man 3', I'm not really sure why they bothered to release this one shot story by Christos Gage.

The story itself just seemed really off and, if I'm honest, a bit of a let down considering how good the rest of Gage's work has been in the past.  Normally his work manages to be both quite character driven and exciting at the same time yet that was sorely missing here.  Other than the banter between Rhodey and Stark about who would shine whose armor depending on who ends up finding the 'Melter' was fun but the rest seemed quite forced.  A lot of the issue consisted of them telling each other all the ways that they had tried that hadn't found their nemesis.

The Melter character is the one that suffers the most from the poor writing.  An interesting character who makes a great entrance in this issue ends up just being a bit of a distraction for Iron Man and War Machine instead of feeling like a real threat to either one of them.  That's a real shame because so much more could have been done with the character.

Art wise, the issue is fine but it's got the same flaws as the story in that while it's good and functional, that's all it is.  The action doesn't pop off the page like it normally does and the battles don't even seem all that exciting.  The battles are normally a massive strong point of the Iron Man comics but here, it just seems off.

A nice touch is the addition of an early Iron Man story featuring the Melter.  It's a much better story with much more excitement in the story than the main one by Gage.  While it's not a perfect story by any means, it's still a much better story.  That said however, it's not really enough to rescue this issue from being disappointing and that's a shame because I had really high hopes for this one.