How I Spent My Summer Vacation DVD Review 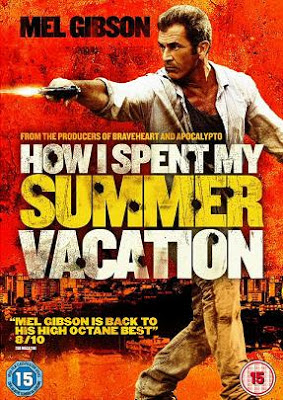 It's been a bad day for Driver (Mel Gibson) and it's not getting any better. He just made a big haul of millions that would give him a nice summer vacation on easy street. A good idea that went south - literally.

During a high-speed car chase with the US Border Patrol, and a bleeding body in his back seat, Driver flips his car smashing through the border wall, tumbling violently, coming to a stop ... in Mexico. Apprehended by the Mexican authorities, he is sent to a hard-core prison where he enters the strange and dangerous world of "El Pueblito", the worst prison in all of Mexico. Not an easy place for an outsider such as Driver to survive, unless it's with the help of someone who knows the ropes - a 10 year-old kid.

When a movie starts with a car chase involving a mass of police and two criminals dressed as clowns while a voice over laments over how the whole thing happened, then you know you're in for a good time.

After a few well reported problems in the press, Mel Gibson's star seems to have fallen quite a way in the Hollywood world and that's a real shame.  Regardless of his problems, he's always been an enjoyable actor to watch during his movies, especially in movies like 'Payback' and the 'Lethal Weapon' movies.

This one brings him back up to form, not with a bang but with a massive blast.

This movie acts as if it's an unofficial sequel to the 'Payback' movie I mentioned earlier thanks to some similarities such as a U.S. military tattoo, the chain smoking, a habit for thievery and many more.  It also takes some of the things that I liked so much about the movie 'Once Upon A Time in Mexico' and transports them slap bang in the middle of this movie but with added bloodshed, cynical humor and a great relationship between Gibson's character Driver and a child that he befriends during his time in the prison.

The cast really do some absolutely fantastic performances during the movie.  One of the best of these being Kevin Hernandez as The Kid.  Normally I don't like those sorts of characters in movies but this one worked superbly and more than held his own next to Mel Gibson.

Talking of Mel Gibson this is definitely his movie.  In fact, this movie says to me "hey look guys, I've still got it" but not in a cheesy way.  This movie shows us all just why we used to like Gibson in the first place.  He delivers the part of the world weary and cynical Driver with aplomb and really makes him a memorable character.

However, Driver isn't just a character that kicks ass and takes names.  The relationship with him and The Kid really shines through out the movie sometimes coming across as a father/son relationship and at other times like an older brother looking after the younger.  Yet it does all of that without being overly sentimental or cloying in the slightest.  His bitter, cynical outlook on both his life and his time in the prison really brings forward some really comedic moments that had me laughing out loud on more than one time.

Special features wise, the ones here are a little disappointing.  I would have liked to have seen a little more behind the scenes stuff but that's a minor complaint considering how entertaining the movie itself is.

All in all, I would highly recommend this movie.  If you like movies like 'Payback' or 'Once Upon a Time in Mexico' then you will absolutely love this movie.  It's a bit of a shame that it wasn't as successful as it should have been because it really is a massively enjoyable movie.  I would love to see Gibson make more movies like this, especially with the bitter, cynical kind of humor that is so evident here.

Posted by Pat Scattergood at 10:45