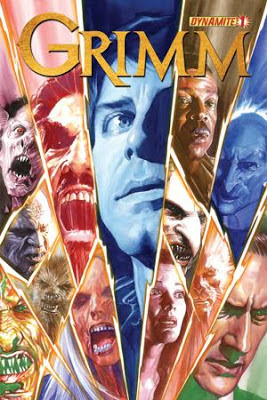 The Coins of Zakynthos have long been used in some of the most infamous moments of history due to their mysterious power.  Kelly Burkhardt begins her quest to destroy the coins pursued by enemies from all sides but will she survive?

Story wise, I loved it.  It was fast paced, action packed and the characters were handled brilliantly.  In fact, I'd even go so far as to say that this story wouldn't seem at all out of place in the show itself.  The writers have done a really good job of making a story feel like it's part of the overall mythology or the show itself while at the same time keeping hold of it's ability to be a standalone release as well.  That takes some pretty good writing to be able to do that.

The twists and turns here, while not Earth shattering, did really keep the story moving along at a great pace and left me eager to see more of the story itself.  I want to see what is going to happen to Kelly, I want to know just what Nick and his team's plan is.  I most definitely want to see more of the newcomer as well.  I won't spoil it for you but I can't wait to see where her story is going to be taken.

However, there is one major point that I think lets the story down quite a bit and that's the art.  Considering a comic book title lives and dies by it's art work, the work here just doesn't live up to the promise of the story and I think that really hurts this release.

The art by Jose Malaga just seems really hit and miss in such an extreme way that it starts to become quite distracting in places.  In the space of one page you'll see a couple of panels that look really detailed and well drawn but then you'll see panels that just look rushed and, dare I say, sloppy?  That's a shame because I've heard quite a lot of good things about Malaga's work but if this is anything to go by then I'm not all that impressed if I'm honest.

If you can look past the hit and miss artwork then you are in for a treat story wise, especially if you are a fan of the television show itself.  However, I found myself being distracted by the fact that the panels were so disjointed.  That said, I'll definitely be checking out the second issue because that was one hell of a twist at the end.

'Grimm Issue 1' is available to buy from May 8th
Posted by Pat Scattergood at 15:35