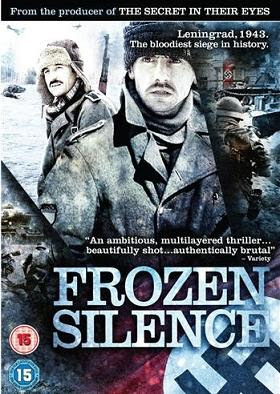 How do you find a murderer amidst the chaos, death and destruction of the Second World War?

On the Russian Front in the harsh winter of 1943, a series of bodies, hideously mutilated and carved with bizarre symbols and messages, are discovered.

Arturo, a world-weary police inspector, now serving his country in the brutal regime of the military, makes it his personal mission to track down the killer, a cunning, vicious entity seemingly intent on making known a diabolical master plan, one that may lead to the very top of the chain of command.

As a fan of military history, I've always been interested in the idea that a group of Spanish soldiers joined with the army of Nazi Germany to fight together in the 2nd World War.

This movie takes that idea and wraps it up in a murder mystery with some superb twists and turns that will keep the viewer guessing to the very end.

In this movie, the idea of that group being involved with the army itself is well explored in some of the dialogue between the investigating officer and his superiors.  While that isn't fully explored, which would have made a really interesting side story, the strength of the mystery and the ensuing investigation is very well done.  I loved how many twists and turns there were during the length of the movie.  In fact, the movie had a really good but old fashioned quality to the mystery itself and that, for me, really raised the quality of the movie.

Acting wise, the cast were superb.  The best of these was by far Juan Diedo Botto as Arturo.  His portrayal of the investigator was spot on and came across as a mix of Poirot and a private detective from a Humphrey Bogart style movie.  As the movie wears on, his character becomes more and more suspicious of his superiors and of his other soldiers but Botto does this in such a subtle way that it really is a joy to watch him on the screen.  When the movie hits the final third and the reveal of the killer, he does an absolutely brilliant job of portraying the shock and understanding of finding out just what happened.

Another strength of the movie was that the reveal of the killer was superbly done and the reasons behind the killings, while not justified, made the killer in to quite a sympathetic character.  That made a nice change from just having a movie that was black and white or with no reasoning behind the actions.

All in all, this is a superb movie.  If you are a murder mystery fan or a fan of military drama then this is most definitely a movie that you should check out.  While there are a couple of places that the lowest budget shows, this is a very well written and acted mystery with some superb twists and turns.

Posted by Pat Scattergood at 14:47