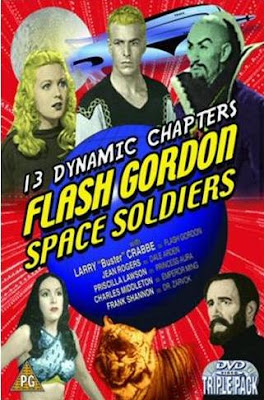 
Buster Crabbe stars as Flash Gordon in this classic 1930s serial presented for the first time on DVD.

Humanity is doomed to destruction! A distant planet has broken its orbit and is headed straight toward the Earth. While Dr. Hans Zarkov works feverishly to finish a rocket ship of his own design, internationally renowned polo player and Yale graduate Flash Gordon is a passenger on a small plane where he meets fellow passenger Dale Arden. When a meteor storm destroys their aircraft, Flash and Dale bail out and land near Zarkov's ship. The great scientist enlists them to join him on his quest to save Earth, and the heroic trio blasts off into space to rendezvous with the runaway planet Mongo.

Featuring all 13 episodes of the exciting serial series.

Buster Crabbe was known as the 'King of the Serials' and for very good reason. Not only is he very well known for being the one of the best portrayals of the legendary 'Tarzan' but he also played the equally legendary 'Flash Gordon' is a series of classic Sci-Fi serials.

This was the first in that series. Sometimes just called 'Flash Gordon' and other times 'Flash Gordon: Space Soldiers', this is a fabulously fun and campy slice of science fiction fun.

Buster Crabbe gives a delightful performance as Flash Gordon. Here he is a champion polo player on his way to studying at Yale, instead of being a famous American Football player, he accidentally stumbles in to a plan to save the Earth from the impending doom of the planet Mongo hurtling towards them.

A lot of the scenes have a very classic charm to them. While it is very cheesy in places, that is part of the fun of proceedings.

The cast itself includes some absolutely brilliant and legendary stars from the 'Golden Age of Hollywood'.

Not only do you have Buster Crabbe but you also have Jean Rogers (from the brilliant 'My Man Godfrey') and Charles B. Middleton.

While the picture transfer isn't brilliant and nor is the sound, that's quite understandable when you consider that it was released in 1936.

Considering that you can get this for next to nothing, which for a three disc set is a bargain, I would definitely recommend this to fans of the good and old fashioned science fiction. I especially think that fans of the classic 'Doctor Who' serials will adore this too.

Posted by Pat Scattergood at 15:18