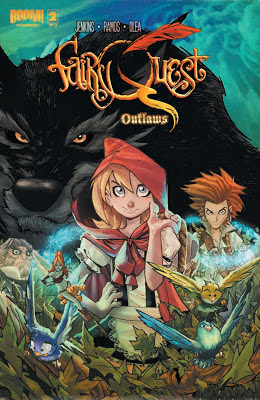 After escaping from the clutches from Grimm, Red and Woolf have managed to find their way to Neverland and meet up with Peter Pan.  When they are betrayed they have to try to get through the dark forest to once escape Grimm and his gang but will they survive?

I was actually very surprised by how much I enjoyed the first issue of 'Fairy Quest' so when it was announced that the series would be three issues instead of two, I was very happy.

Here, the story continues  at a cracking pace with Red and Woolf escaping to meet up with Peter Pan, Tink and the Lost  Boys.  Grimm continues on his quest to to capture Red and wipe her memory and there are loads of references to the various other fairy tales we all know and love.  That's not all however.  All of these things and more are combined with a great steak punk feel to really create a unique and interesting take on the fairy tale world.

One of the clever things about this release is that it's simple enough to read to the younger ones out there but also exciting enough to grip the older comic book fans out there.  There are loads of little touches there that the adults will absolutely love but there are some great moments too that the children you read it too will love too.  This is definitely a comic book that I can sit down and read with my little lad and he'd really enjoy it.

I did especially love the appearance of Captain Hook.  He was dark and menacing enough to put the 'spook' to the little ones but not enough to give them nightmares.

The art here is vivid and has a great steampunk feel to it.  In fact, I'd say that the art has a really cool and vintage look to it.  The characters are positively vivid and really come to life.  That's definitely evident on the chase scenes most of all.  Those scenes had a great energy to them and that  really helped with the story.

Most definitely a title to keep an eye on.  I'd class this as an all ages comic book because not only is it exciting enough to keep the adults happy, it's also a great title to either read to or with the younger ones.

Well  worth picking up