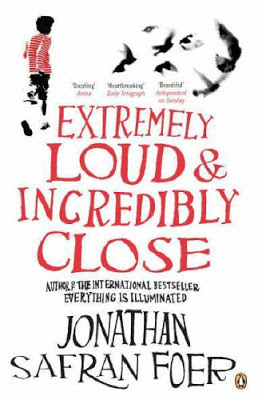 2 years after the death of his father in the 9/11  tragedy, a young boy finds a key in the bottom of a vase while looking through his fathers things.  This begins young Oskar's adventure when he embarks on a quest to find out as much about the key as possible and find out who it belongs to.

Jonathan Safran Foer, the author of 'Everything is Illuminated', returns with his second book and boy is it a good one.

After the tragedy of 9/11, there were an absolute flood of fiction books that came out.  Some were really well written and some just came across as crass and having been written just to try to make money.  I really hated those books as it didn't seem right to do that but this isn't a review about morals, it's a review about a very well written book.

The character of Oskar is absolutely superb.  While it's not mentioned at all, he comes across as a child with autism and therefore his mind works in a very different way to the rest of the characters.  That's one of the main strengths of the book because Oskar is a very unique character.  His voice is the main one through out the book and it's a strong one.  You can't help but get behind the character and his quest to discover what the key is actually for.

Weirdly, the writing is so easy to get hooked in to and flows at such a good yet subtle pace that by the end of the book, the key becomes almost unimportant because you're so drawn in to the life of this little boy and of his family members.

There's also the story his his grandfather and grandmother running alongside the main story and that's just as strong as the main story.  In fact, that aspect of the story moved me to tears more than once and the writing of it was utterly unique.  It  really sounded like a completely different person writing that part of the story.  It emotionally hooks you in and doesn't let go until the very end.

After watching the movie version of 'Everything is Illuminated', I was very eager to read one of the book versions of Foer's work and I wasn't disappointed.  Apparently this book wasn't as popular as his first but I honestly can't understand why.  It's a positively fascinating look at how a family deals with the grief caused by one of the most infamous attacks in world history.

A beautiful, heartbreaking and yet positive book that I can't recommend highly enough.  Well worth picking up.

Posted by Pat Scattergood at 03:05