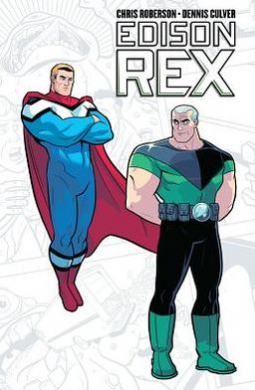 Edison Rex is the smartest man in the world, a criminal genius, and the archnemesis of the world's greatest protector, Valiant.

Having dedicated his life to defeating Valiant and proving once and for all that he is a menace to humanity and not a hero, what will Edison do once he finally succeeds?

And with Valiant out of the way, who will be left to protect the Earth?

This volume collects the first seven issues of the Monkeybrain Comics digital series for the first time.

I wasn't really all that sure about what to expect from 'Edison Rex' as I knew next to nothing about the title itself other than the plot outline.

While it seemed interesting, it sat on my shelf waiting to be read for a couple of weeks before I actually got up to read it.

To be honest, while it was a good read I just couldn't really get all that in to it.  While the trend at the moment is to make the superheroes more human, here they have gone the complete opposite and harked back to the classic days of everything being over the top.

For this title, that does work really well.  The writing by Roberson is fast paced and well thought out.  He peppers the story with a hell of a lot of nods to the classic stories.  I could sit there and list them for you all but that would spoil most of the fun for you guys.  To be honest, there are so many nods and winks to those that you could read this title many times without catching them all.

Art wise, while not Earth shattering, carries on with the nods to the old classics by making the characters look like they wouldn't look out of place in a 1950's comic book series.

Other than the nods to the classic comics that we all know and love, I just couldn't get in to this title to be honest.  It wasn't a bad title in the slightest.  In fact, it was well written, well paced and I enjoyed the nods that I mentioned earlier.  Yet all despite that, there was just something about the title that didn't make me think it was great.

That said however, it did show some promise and I would be interested in seeing where the characters are going to go from there but at the same time, I wouldn't class it as essential to find out.

All in all, if you love old school style comics then you will probably adore this title and the constant nods to the past.  Personally I came away a little disappointed.

Posted by Pat Scattergood at 12:15