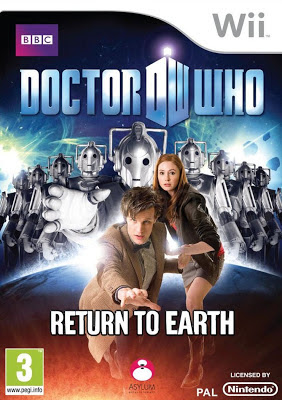 Take on the roles of the Doctor and Amy Pond in this gripping action adventure to help the SS Lucy Gray return to Earth.

Unravel a sinister plot by the Cybermen and prevent the Daleks from retrieving a danngerous Time Axis as you explore the deserted Starship.

I have to admit, I was looking forward to finally playing this game as I am a massive Doctor Who nut.  It doesn't matter whether it's the newly revived show or the classics starring Pertwee, Davison etc to me.

That excitement vanished when I put this in to the Wii.

Surely, it can't honestly be that bad I hear you say.  Well in good old pantomime fashion I say to you dear readers "oh yes it can!"

The story itself sounded really interesting on the back of the box.  In fact, it made me wonder how the Cybermen and the Dalek's would be connected in to a game.  The answer to that being, in a really bad way.

The writing is atrocious for this game.  In fact, the story just serves as little more than a convoluted excuse to try to get every big character possible involved in the game, no matter whether or not it makes sense.  And you know what?  It didn't make sense.

There were so many things wrong with this game that I really don't know where to start so we'll start with the voice acting as that seems a good enough place as any.

Matt Smith and Karen Gillan reprise their  roles as The Doctor and Amy Pond respectively and that's where the excitement there ends.  They couldn't have sounded more bored if their lives depended on it.  One of the other things about the voice acting that really annoyed me is that throughout the game they would range from being really loud to so quiet that you couldn't hear what the hell they were saying.  That's kind of a big thing considering that most of the time they would be describing just what in the name of blue hell you were meant to be doing to get past that part of the game itself.

Next stop the graphics.  The Wii is quite a powerful console and has delivered some of the most mind blowing and beautiful graphics I have seen in a game for a long time.  This game however, is as opposite to that skill as it could possibly be.  In fact, these graphics would have been out of date on the PS2.  They're so block like and badly animated that a lot of the time you find half of your character disappearing through a wall or a box or a, well you get the picture. 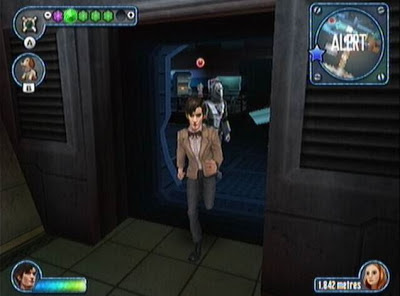 Gameplay is something that a game obviously lives and dies by.  This game  not only dies but does it in an hilariously bad Bruce Campbell impression but with none of the charm of Bruce Campbell way.  It's atrocious and will have you pulling your hair out in clunks through out the game.  There were parts that were so easy that you could do them with your eyes shut and then the next second you'd find yourself screaming at the screen because the controls are so shoddily done that you find your character full on running in to a fire or a robot and just standing there instead of moving.  It's the same with the enemy A.I. in that it's so hit and miss that you honestly have no idea if the developers were even awake while making this game.  One minute the enemy will find you no matter how well you are hidden and then you can walk past with them looking at you and doing nothing.  That's most evident with the Cybermen, who are more intent to stand  there staring at the wall than trying to stop you!

All in all, I would honestly avoid this like the plague.  I'd read reviews saying that this game was an insult to the shows fans but I had thought that was overkill.  Then I played it.  Yes, now I agree with  them.  Bad voice acting, awful game play and wildly out dated graphics make this one a game to massively avoid.

Posted by Pat Scattergood at 12:31