Doctor Who: Resurrection of the Daleks DVD Review 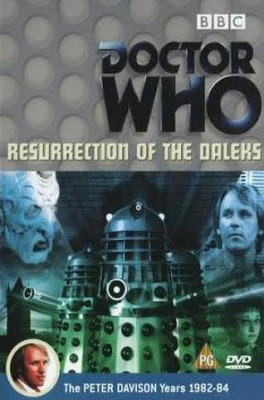 
Captured in a Time Corridor, the Doctor and his companions are forced to land on 20th Century Earth, diverted by the Doctor's oldest enemy - the Daleks.

It is here that the true purpose of the Time Corridor becomes apparent: after 90 years of imprisonment, Davros, the ruthless creator of the Daleks, is to be liberated to assist in the resurrection of his army. But not even the Daleks forsee the poisonous threat presented by their creator.

Indeed, who would suspect Davros of wanting to destroy his own Daleks - and why? Only the Doctor knows the truth. But will he be capable of descending to Davros' level of evil in order to stop him?

For some, Peter Davison's tenure as the fifth Doctor was seen as a bit disjointed and maybe even described as hit and miss.

Personally I think that while some of the complaints are correct about some of the stories being poor, this most definitely isn't one of them.

The little nods to the continuity of the series are one of the main strengths of this episode. Another strength is the performances. There are some fantastic performances from Davison as The Doctor and Terry Molloy as Davros. The chemistry between the two actors really shines off of the screen and they really play up the history between each other.

Strangely the best performance comes from one of the companions, Tegan, who seemed to divide the fans of the show during her two tenures as companion. Some found her annoying and some found her to be a good counter foil to the Doctor himself. I was never that big a fan of her character but here she sure as hell not only holds her own but completely takes over the story in a couple of places. Her end speech to the Doctor was brilliantly written and superbly acted by Janet Fielding.

The writing and direction of this Dalek story, while not up to the lofty standards set by 'Genesis of the Daleks', is still up there with the best of the Dalek episodes. I really liked the direction as well, especially how they used simple hiding places and shadows to make the Daleks even more menacing.

The special features here are, as always, fantastic. Combining news footage of various appearances in the media and even one of the last interviews filmed with John Nathan-Turner a couple of months before his passing, the special features may not be as numerous as other releases by the BBC but the quality is there in spades.

Like I said before, while this isn't as good as the classic 'Genesis of the Daleks' starring Tom Baker, I still think this is one of the best Dalek episodes filmed during the classic Doctor Who run and therefore is well worth picking up. Not only one for the fans but also well worth picking up for fans of the revamped Doctor Who series to get a sense of the long running shows history.
Show 4/5
Picture 4/5
Sound 4/5
Special Features 4/5
Overall 16/20
Posted by Pat Scattergood at 16:02