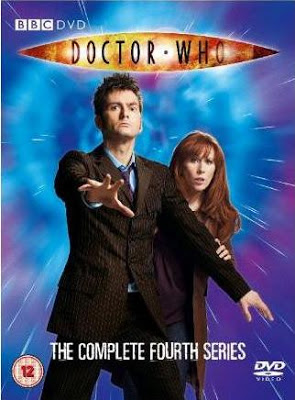 David Tennant is back in his role as the Doctor in the fourth series of the hit sci-fi show! Award-winning comedienne Catherine Tate returns as the Doctor's new companion, reviving her role as Donna Noble. Also on hand to help the Doctor are some familiar faces as he has the New Dalek Empire to stop!

First up is the Xmas special Voyage of the Damned. A 60 min episode set on the star cruiser RMS TITANIC (you'd book up on that wouldn't you?) which the Doc lands on and decides to have a mooch about, where he meets Astrid Peth (Kylie Minogue) who is working as a waitress on board. Astrid instantly likes the Doc and when disaster strikes they team up to try to save the day.

What follows is a Xmas themed disaster movie, that just doesn't work very well and contain lots of plot holes

I don't know why but the Xmas specials just don't seem to gel for me, and even Kylie Minogue can't lift this from mediocre status. In the first Xmas special (the Christmas Invasion) RTD got it spot on, the second one (the Runaway Bride) was also quite good, but this one is broken big time.  Cardboard cutout characters that you just don't care about, in fact when two of them bought it I actually cheered, a less than subtle plug for gay rights, and a gun shot wound that get less serious as time goes on are a few things wrong with this one, don't get me wrong, even bad who is worth watching but I really expect better from RTD.

But onto series 4 proper and some good news, we get a new companion in the form of Donna  Noble played by the divine Catherine Tate (in case you haven't worked it out I'm a big fan ). As a result of this even the bad episodes are worth watching as CT really brings her A game and I promise you her fate will bring even the hardest heart close to tears.  Once again there is a story arc going through the whole season and keep your eyes peeled for glimpses of Rose (Billie Piper who is back for a couple of episodes.)

This season is much better than series 3 with mainly excellent stories and even the bad ones aren't that bad really.

This is in my opinion a comedy episode that only exists to reintroduce Donna, and it is great.  I watch this episode when I need a boost and it never fails, some lovely camera work when The Doc and Donna keep missing each other and one of the funniest scenes ever when they spot each other through windows is brilliant, a great start to series 4.

Silence  in the Library / Forest of the Dead

This 2 parter is by Steven Moffatt so you expect great things, and he always delivers.

This is a creepy tale set on a library planet where in response to a message sent from a professor River Song (!) as the travellers get menaced by the Vashta  Narada, I don't want to spoil this episode but future seasons will show how important this story is.

A Donna light episode but it is so well done you won't miss her, set on a space shuttle that has broken down this is a claustrophobic character piece that is generally unnerving, a lot of fans slate this episode as stupid with large plot holes but they are wrong. It is great with some excellent acting throughout.

My personal favourite episode of the season and it doesn't have the doctor in it.

It asks the question "what if Donna had never met the doctor" and then delivers a fantastic 45 mins of breathtaking storyline that takes in several story's from seasons 3 & 4 and shows what would happen if the Doc wasn't around so you don't want to miss this one!

This one is a bit of a mixed bag really, it brings back the Daleks but also brings their creator Davros ( a character I can't stand) plus virtually everyone who has travelled with the Doc since season 1 shows up and then has nothing to do.  I can't say this is a great episode as it is a bit too much like fan fiction and has some glaring plot holes,( and I mean massive great ones) but it is a bit of fun and worth watching to see everyone in the console room together, Donna.badly flirting with Captain Jack and Jackies reaction when told she can't pilot the Tardis, but the ending will break your heart, guaranteed.

May I recommend you obtain a copy of RTD 's excellent book, A writers tale to read whie you watch this series, as it follows the hole series behind the scenes and is very readable indeed

Posted by Pat Scattergood at 11:13