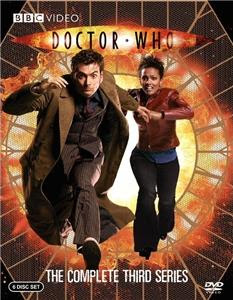 The third installment of Doctor Who is full of new thrills, new laughs, new heartbreak and some terrifying new monsters. From the moment the Doctor walks into the life of medical student Martha Jones he changes it forever. In Elizabethan London, they meet William Shakespeare at the Globe Theatre while back in present day London, 76-year-old Professor Lazarus recaptures his youth with consequences that threaten Martha's entire family. And, the Doctor's sworn enemies, the Daleks, who have been hiding in 1930's New York, return with a terrifying plan for humanity.

Ok, on to series 3, this time no Billie Piper so we need a new companion, doing what was going to be a one shot is Catherine Tate as Donna Noble in The Runaway Bride, a Xmas special. I rather like it and her, after all the lovey doveyness of Rose its great to see someone give the doc what for (al la classic series Tegan).   It's a quite fun episode that leaves you wanting more Donna, and shows you just how dark the Doctor can be. The time flies when you watch this which I always take as a good sign ( trust me some series 3 episodes drag). Overall a good Xmas day episode with a top cast

Series 3 proper starts with Smith and Jones, which introduces new companion Martha Jones, played admirably by Freema Agyeman, who does a lot with a dreadfully underwritten part.  It shows how good an actress she is.

This series has 8 stand out episodes 3 as some of te best who ever written and 5 as some of the worst, this is a real mixed bag

What can I say but WOW!!! What a story, adapted from the Dr Who book Human Nature , (which featured 7th doctor) this story starts in the middle and show the doc as a teacher in a boys school circa 1914 but this doctor is a human, and he has no idea who the doctor is, I won't spoil it but these two episode feature great aliens, true love and truly creepy scarecrows plus I defy you to watch the ending and not get a lump in your throat

One of Dr Who's strengths is that it can be anything and this Doctor lite episodes show it can be very scary indeed.  It is mainly the story of Sally Sparrow (she so should have been a companion) who is up against the Weeping Angels, a bunch of aliens that look like stone statues and can only move when unobserved, they kill you by sending you back in time and they live on the temporal energy this produces and Sally has to save the Doctor armed with nothing but a DVD. This episode is another by Steven Mofatt so was always going to be good.

Daleks in Manhatten/ Evolution of the Daleks

When RTD said he was giving newcomer Helen Raynor a two parter I remember fans couldn't wait to see it but oh dear did no one read this before shooting started?

It's a bit like  a 'Carry On' version of Doctor Who, with pig men, OTT Brooklyn accents, useless Daleks that can't even make a lightning conductor (really? This is the race that went to war with the Time Lords) and worse of all the Dalek human hybrid (or Squiddy as his friends call him).  It's even got a song and dance number!

Utopia/The Sound of Drums / Last of the Time Lords

Oh dear, when RTD turned these scripts in did no one think to say to him, Nice try Russ but it looks like you need a vacation old son.

I hate spoiling episodes for people but heres a few things that are wrong.

Captain Jacks back, but why? He does nothing

Y A N A not as clever as RTD thinks

Old Doctor is a good idea if he has to work around being old to solve problems but to make him old to shut him in a wheelchair whilst the Master dances to Scissor Sisters, it is lost on me.  RTD, take more water with it my friend

The whole ending of this episode makes no sense, Dr Who does Jesus I think, I don't want to give too much away because you really should watch this to see how bad it is