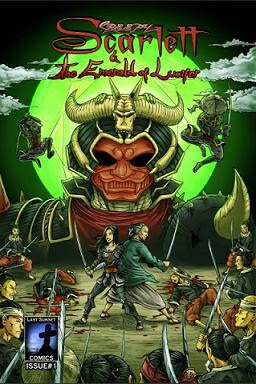 Series 1 of the 'Creepy Scarlett' comic book series begins with "The Emerald of Lucifer".

A samurai turns up at Scarlett's cemetery after years on the run protecting the emerald of Lucifer. With a Warlord hot on his trail trying to regain the emerald the samurai must train Scarlett and face the Warlord once and for all.

Scarlett must come to terms with her new role as protector of the emerald as she begins to unravel her own mysterious past.

'Creepy Scarlett' is a bit of a weird title to review as it comes across as a title that is trying to many things at the same time but I'm not sure how to classify it if I'm completely honest.

'Creepy Scarlett: Volume 1' was a collection of three stories featuring Scarlett but this release is the first release of the comic book series itself and it starts with a bang.

The story starts with an old samurai turning up where Scarlett lives and upon finding it's only her there, proceeds to train her to guard the emerald he has been carrying with him from the forces of evil chasing him.

An exciting and fast paced story, Buchan has crafted a story that while it can be a little confusing in places, this is still a title worth picking up.  The character of Scarlett herself grows as the issue progresses.  At the start of the issue, she comes across as child like and naive but as the story gets further, she grows in to a harder, more cynical character and the story itself ramps up the quality in  that aspect.

While at the beginning she was a cute character, like I said before, I did find the constant candy jokes started to get a bit annoying but when both she and the samurai embarked on the massive battle, the story got a lot more gripping and exciting.

Art wise the title was superb.  At the beginning when Scarlett was childlike and naive, the art seemed to have quite a playful side to it but when it progressed on to the battle scenes, it took on a full action packed feel to it.  However, as the art progressed in the issue it was at the ending of the story that impressed me the most.  It ended in black and white with just her eyes colored blue and it had a real old school movie feel to it.  Felipe Sanhueza Marambio really does a good job here of making the character of Scarlett grow during the course of the issue.

While the first issue may not be to every ones  taste, this is still a good issue to pick up.  The issue moves along at a cracking pace and, while the constant candy jokes at the beginning did begin to grate after a while, the progression of the character really made me want to open up issue two to see where the team are going  to take the character.