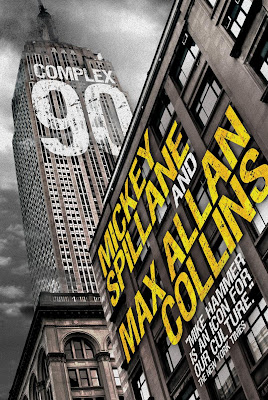 Hammer accompanies a politician to Moscow, where he is arrested by the KGB and imprisoned. He quickly escapes, but back in the States, the government is none too happy. Russia demands his return to stand charges, and various government agencies are following him.

A question dogs Hammer: Why does Russia want him back, and why was sent to Russia with the senator in the first place?

'Complex 90' is one of those Mike Hammer novels that was sadly never finished due to Spillane passing away but his legacy was left in the more than capable hands of Max Allan Collins, author of 'The Road to Perdition' amongst others.

I've always been weary of books that have been started by one author and then finished by another because they normally end up being quite disjointed because of the different styles of the authors but here that is not the case at all.

In fact, it's next to impossible to work out which parts are Spillane's and which parts are Collins' in all honesty and that's down to the simple fact that both are superb writers.

The story itself is pure and utter classic Mike Hammer.  If I'm completely honest, if you don't like old school spy stories with a touch of the film noir style detective feel then you are going to hate a book like this.  However if you are a Spillane fan then you most definitely know what to expect from this title.  Hammer shoots and fights his way back to America only to find there are double crosses galore in store for him and his girlfriend.

There are some great nods to past Hammer stories but the clever part is that even if you have never read any of those titles, you won't be lost at all.  I also really liked the flashbacks in to both Hammer's and his girlfriends past.  That really added some extra layers to the characters and in turn, made the story even more exciting than it already was.

The pace of the book barely lets up and really cracks along at a very fast pace.  The only times the reader can really rest is the 'quieter' scenes where Hammer tries to place together all the pieces of the puzzle so he can try to work out just what the hell is going on to him.

If you want a subtle and classy thriller then you are most definitely out of luck here.  However if you want a fast paced, action packed spy thriller with a ton of twists and turns then this one is well worth picking up.

However, if you are a Mickey Spillane fan, a Max Allan Collins fan or a Mike Hammer fan then I would honestly say that this is an essential purchase for you guys and gals out there as Collins has done a truly superb job of finishing Spillane's story while keeping in with the things that make the character so beloved by his fans.

Posted by Pat Scattergood at 10:13