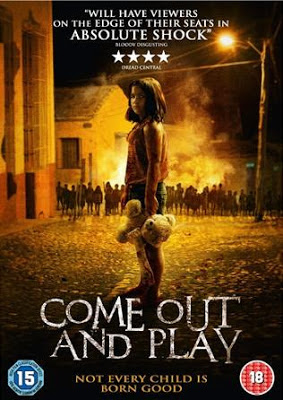 An American couple head to a remote Mexican island for a relaxing vacation only to suffer a nightmare ordeal at the hands of out of control children. Beth (Vinessa Shaw) and Francis (Ebon Moss-Bachrach) have recently married and are expecting a child. Deciding to spoil themselves with one last holiday before the demands of caring for a baby take over their lives, they head to a beautiful sun-bathed island. On arrival they are surprised to discover swarms of children but a distinct absence of adults and authority figures. Their puzzlement gradually turns to terror as they realise the extent of the danger they are in...

I am a massive horror movie nut and will pretty much watch all kinds of them from the deeply psychological to the by the numbers stalk and slashers.  I had really high hopes for this one as the trailer looked brilliantly spooky and have heard a hell of a lot of good things about Makinov.

Did this one live up to that?

Well, even with my quite low standards I have to admit that I came away feeling quite disappointed as well as wondering what all the fuss about Makinov is.

There were some interesting ideas behind the movie but Makinov seemed quite content to ignore them in order to try to do little more than slowly walk up to the actors with his camera.

That's a real shame because some of the scenes worked really well thanks to how incredibly creepy the children in the movie are but those are so few and far between that the movie itself felt a hell of a lot longer than it actually is.

I would even go so far as to say that there were even parts of the movie where I was actually quite bored and wondering where the plot was going to go and if there was a point to some of the actions that the characters were doing.  Don't even get me started on the massive plot holes either.  It was almost as if Makinov had started to write the screenplay, forgot to finish it and then realised he had to film it and therefore just throw anything he could think of out there.

The acting for the most part is average to good but with the incredibly bad directing, although not the worst I've seen by a long shot, and the mundane dialogue blow that as well as any level of creepiness or dread.

It's a real shame about how much of a disappointment this movie was as I really wanted to enjoy it.  It looked really full of dread and scares in the trailer but for the most part, this was just dull.

'Come Out and Play' is out now to buy on DVD
Posted by Pat Scattergood at 10:56