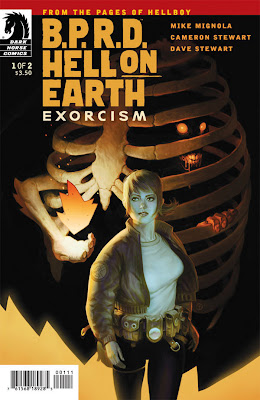 Field agent Ashley Strode, last seen in B.P.R.D.: War on Frogs, is deployed to a Mexican village after a demon commands her to release one of its brethren, or lose the soul of a small child.

I have to admit that due to all the relaunches, reboots and spin off comics that have been coming out in the last 18 months or so, I hadn't even given this title a thought.  In fact, I just thought it was just another spin off and that was all.

Instead what I got was a series that is every inch as good as the Hellboy series and even surpasses it in places.  This two part story was my introduction to the series and I have to admit, what an introduction it was.

The story is superbly written with some great character development as well as some brilliant nods to future moments without giving anything away or telegraphing any of the twists.  Even though I hadn't read any of the other issues before, I wasn't actually lost.  You got a little bit of background information and then were thrown right in to the action.  The fact that this issue takes past in both the past and the present doesn't make it disjointed at all, in fact it gels really well.  Mike Mignola and Cameron Stewart really do work together fantastically well as a team and that really shows with this story.

Art wise, it's by the Eisner Award winning Cameron Stewart so what can you expect other than some brilliant art?  While it's lacking slightly in the gore and horror department art wise, the art works almost as if it's a character itself.  Stewart really brings the story to life with his art and it's easy to see why he is held in such high regard in the comic book world.  If this is an indication of how good the art is going to be in other issues then sign me up!

All in all, ignoring this title because I thought it would be just another spin off was a massive mistake on my part.  After reading this issue, I'm going to go back and try to go back to grab as many of the other stories as possible.  If they're half as good as this one then I'll be in for a treat.

This one is definitely one that's well worth picking up.