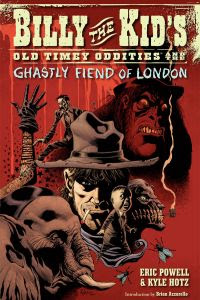 The world believes the notorious outlaw Billy the Kid was killed by Pat Garrett, but in reality the Kid is very much alive, the hired gun of Fineas Sproule's traveling spectacle of biological curiosities--or "freaks," as Billy calls them. In their latest adventure, Billy and crew confront their most vicious challenge yet: Jack the Ripper!

In London to visit a true Elephant Man, Billy, Sproule, and the company learn about the Whitechapel murders and the fact that disfigured people are being blamed for the killings and targeted for mob justice. As the group applies themselves to the case, Sproule looks for information at every bar in the city, while Billy tags along to drink whisky and flirt with prostitutes at each one-which might be a better way to find the Ripper than he realizes.

This one is a weird title to review if I'm completely honest.  There are flashes of gruesome horror, a great historical theme and some tear inducing moments of humor as well.  The three styles there mesh superbly well.

In this graphic novel release, not only do you have the 'Ghastly Fiend of London' story but you also have the short story 'The Pit of Horrors' that feature the merry band of misfits as well.  As a newcomer to the series, I thought the shorter story really served as a good introduction too.  It did take me a couple of pages to get who was who in the story but I really enjoyed 'The Pit of Horrors' and it really set up the main story superbly.  The only character I didn't really understand was the little boy that hangs around with Billy the Kid but from what I can gather, the character seems to be there to be Billy's conscience.  I'll definitely go out to invest in their first adventure though.

The main story 'Ghastly Fiend of London' is absolutely brilliant.  Set in Victorian London, the merry band of misfits tackle the case of the infamous 'Jack the Ripper' and the story is here in all it's bloody and gory glory.  The way they combine the characters in the group  with their vision of what the people alive, such as 'The Elephant Man' himself, as well as fictional characters from stories of that time such as Jekyll and Hyde.  All the characters seem to mesh really well and none of them seem to stand out as not fitting at all.  That's thanks to the strength of the really strong writing by Eric Powell.  I wasn't all that familiar with his work before this title.  He was always a writer who I had heard of but never read anything by but his rather unique brand of horror and darkly comic moments really made this title so interesting to me that I didn't want to put it down.

Art wise, Eric Hotz's style is a great fit for this release.  The way he draws the characters in a realistic way makes the shocking and sometimes horrific moments really stick in your mind.  I won't spoil it for you but there's a scene with the tragic 'Elephant Man' that when combined with the writing by Powell really gets to the reader and tugs at the heartstrings despite the gore and death that has populated the book.

This is definitely a title that I will be following very closely in the future.  The unique brand of horror and comedy, along  with some great takes on classic characters make this a superb title to have in any comic book fans collection.

Posted by Pat Scattergood at 01:42