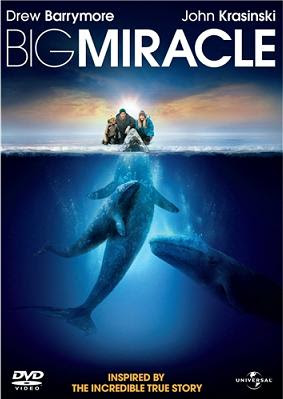 Based on the inspiring true story that captured the hearts of people across the world, the rescue adventure Big Miracle tells the amazing tale of a small town news reporter (John Krasinski) and a Greenpeace volunteer (Drew Barrymore) who are joined by rival world superpowers to save a family of majestic gray whales trapped by rapidly forming ice in the Arctic Circle.

Local newsman Adam Carlson (Krasinski) can't wait to escape the northern tip of Alaska for a bigger market. But just when the story of his career breaks, the world comes chasing it, too. With an oil tycoon, heads of state and hungry journalists descending upon the frigid outpost, the one who worries Adam the most is Rachel Kramer (Barrymore). Not only is she an outspoken environmentalist, she's also his ex-girlfriend.

With time running out, Rachel and Adam must rally an unlikely coalition of Inuit natives, oil companies and Russian and American military to set aside their differences and free the whales. As the world's attention turns to the top of the globe, saving these endangered animals becomes a shared cause for nations entrenched against one another and leads to a momentary thaw in the Cold War.

'Big Miracle' came and went at the cinema with little to no fanfare and that's a real shame actually.  This quiet and unassuming movie is full of heart and really leaves the viewer with a smile on their face.

The story isn't the most original that I have ever seen but one of the things that makes this movie such a joy to watch is the simple knowledge that it is based on a true story.  I know that some of the parts would have obviously been dramatised but for the most part it stays really true to what really happened.

That's not the main strength here though, that honor would have to go to the cast.  They do an absolutely brilliant job of making the characters likeable and easy to relate to.  It is true that some of them aren't fully fleshed out as much as they should be but the performances really raise the quality up a lot higher than it would have been in a different casts hands.

John Krasinski isn't an actor that I am all that familiar with but here, he really impressed me.  His quiet and unassuming performance made the character of Adam really believeable and easy for the viewer to get behind without falling in to the trap of melodrama that sometimes plagues movies such as these.  His character really plays off against Drew Barrymore's character of the Greenpeace member, Rachel Kramer.  Where his character was quiet, hers is loud and full of life.  The two contrasted each other brilliantly well and I especially loved the chemistry between the two.  It really did feel like the two of them had a past and that they knew each other really well.

Ted Danson was superb as J.W. McGraw and really played up the smarmy nature of the character superbly at the beginning of the movie.  He really did come across as the 'evil villain' of the movie  yet without over acting or falling in to being a stereotype.

While the movie at times did feel a little unfocused at times, it really did have a unashamed feeling of hope and love to it without sounding too preachy.  The sheer affection that the characters have for the whales really rubs off on the viewer and you really find yourself rooting for the trio as the quest to free them gets underway.

Personally I loved this movie.  Is it corny?  Very much so in places but it is very well acted and the scenery is absolutely breathtaking.  I watched this with my four year old son and he, like I, was gripped through the entire movie.  There are some genuinely emotional moments in the movie too and while it does give the real life story a more conclusive ending, that didn't hurt the movie at all.