An Interview With Maria Olsen, 'The Hardest Working Woman in Horror' 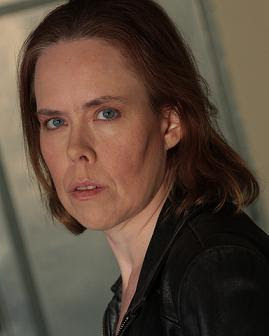 We here at Curiosity of a Social Misfit have been kindly joined by 'The Hardest Working Lady in Horror' Maria Olsen, who has popped in for a chat with Patrick Challis.

PC:  What drew you in to the world of acting and in particular, the horror genre?

MO:  I grew up performing on stage - doing ballet shows from the age of 6 - and to me, acting was a natural progression from dance and music. I wasn't able to do any film in South Africa, though, as I lived a long way away from the country's fledgling film industry, and it was only in 2007, two years after I arrived in the USA, that I started making inroads in The Biz.  I had also been fascinated by horror films ever since I was a little girl avidly reading my collection of Fangoria magazines, and, once I saw myself on screen and realized how intense my on screen presence actually was, I decided to work mainly in a genre where I'd actually book most of the jobs I'd go out for: horror.  This doesn't mean I don't work in other genres, and I also have comedy, fantasy and drama features under my belt.
PC:  You are known to your fans as 'The Hardest Working Woman in Horror' but how would you describe yourself?
MO:  Ha! I just do what I can with the talents that have been allotted to me! I also like keeping busy, both in order to keep my mind stimulated and in order to keep me out of trouble (I'm not always successful as far as "keeping out of trouble" is concerned, though!).

PC:  During your career, what would you say has been the high point thus far?
MO:  I've had many wonderful opportunities in my career so far, but I'm sure the one that got the most exposure was my playing The Fury/Mrs Dodds in Fox's Percy Jackson and the Olympians: The Lightning Thief under the sure directorial hand of Chris Columbus.  Not only did I work with a wonderful, talented and dedicated cast and crew, I also got to do all my own stunts, which included wirework, and this was a very exciting opportunity for me and one that I can't wait to repeat should my character be brought back in the next few Percy Jackson movies.

PC:  What would you say the strangest scene you've had to film has been?
MO:  I've shot some pretty strange scenes: underwater, all nude wearing tons of body makeup (all over body makeup!), wearing HUGE scleral contact lenses that covered my eyeballs so totally that, when I took them off, I resembled The Creature from The Black Lagoon...and those are just three of them! There's also the time I was covered in offal to simulate a disemboweling, the time I was dressed in black leather boots with heels so spiky the only way I could stand was by holding onto the set, and the time I had to climb through the back and seat of an old hollowed-out chair... Go on...YOU choose the strangest out of that lot!
PC:  With producing and other behind the scenes credits to your name, do you prefer to be behind the camera or in front of it?
MO:  I like to be behind the scenes in order to be more in front of the camera, if that makes sense.  I got into producing so that I could help getting awesome films off the page and onto the screen, and, through some AMAZING co-incidence, lol, I'm acting in each and every one of them too!  Seriously, although there are aspects of producing that I really enjoy, I couldn't just produce as I also need to flex my creative muscles.  I also cast - which I LOVE - and I'm shortly to move across into directing too, so, I guess, in other words, I'm a filmmaker!!

PC:  You're appearing in the forthcoming movie 'Lords of Salem', directed by Rob Zombie.  What was it like working with him?
MO:  Rob was very different on set than what I thought he was going to be, given his extravagant persona in his music videos.  He's very quiet and unassuming and stays in the background, directing with a firm and competent hand. I loved my time on set with the TLOS cast and crew, and we shot in two extremely interesting and intriguing locations: Lacy Street Studio and the Los Angeles Theater, a gorgeous 1920s movie theater that has retained most of its former gold-and-gilt glory.
PC:  Is  there a movie that legit scares the hell out of you?
MO:  Yes! Million Dollar Baby scares the hell out of me! That scene where Hillary Swank's character is in the hospital bed, totally paralyzed - all she can do is look - is TERRIFYING to me as it represents a total loss of control over one's life.  Loss of control is scary enough as it is for me, but just to have all of your choices taken away in a split-second, and then to have to life out the rest of your life in a totally helpless state is just horrifying beyond anything that I can imagine.
PC:  Horror fans are a very vocal bunch, I should know I am one, about their likes and dislikes but has that led to any strange or funny stories?
MO:  There's an interesting story attached to Something Sinister, the smart horror feature I'm in and that I co-produced with Christopher Dye of Dyenamic Films.  The leading character's name is Amelia and, when Chris was editing the footage from the promo shoot - taken out at Tapia Park in Malibu, CA - he noticed that a name had randomly been carved onto a tree in the background of one shot.  None of the cast or crew had carved the name and, intrigued, Chris brought the background more and more into focus until he could read this entirely co-incidental name that had somehow sneaked into his shot.  You guessed it; the name was...Amelia!
PC:  What's next for Maria Olsen?

PC:  Thank you so much for stopping by to talk to us here at Curiosity of a Social Misfit, it's been scarily good having you here.
Posted by Pat Scattergood at 13:54