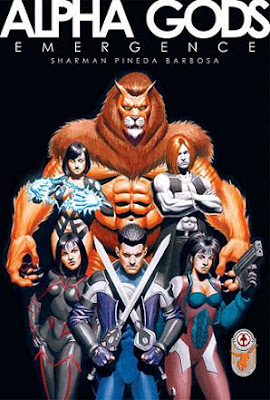 The Alpha Gods’ first mission sees them taking on an ancient evil, Malak. He is a Nephilim, an ancient race that was spawned when fallen angels mated with human women. He’s seeking a way to bring his “fathers” through to our world, and only the Alpha Gods stand in his way.

After reading the first four issues of the 'Betrayal' storyline of Alpha Gods by Ian Sharman, I was quite eager to get to this graphic novel.

The best way to look at this would be as a sort of prequel release showing how the team  got together, introducing the villains, that sort of thing.

As a prequel, it does exactly what it says on the tin.  The characters back stories here are most definitely the focus of the novel and that's a great thing for fans of the 'Betrayal' series. As a fan, it was great to see how the team got together and how each member was recruited.  I was a bit worried that this release would somehow dull the excitement of the 'Betrayal' storyline by being too information heavy but that's not the case here.  In fact, it's the complete opposite.

The back stories are told in little bite sized chunks by Sharman and I really feel that was by far the best way to go about it.  If it had been told any other way, the 'Betrayal' series would  have lost some of it's mystery that surrounds the characters themselves.  What this title really does is shows us the  motivations of the team themselves, as well as the villains, and a little bit of their back story.  I loved how even after reading that, the characters still had their air of mystery to them.  That's the mark of a good writer and that's definitely who we have got here in the shape of Ian Sharman.

Art wise, the quality of the work here is up the standard set in the series itself and that's a real testament to Pineda's hard work and specific style.  While he may not be the flashiest artist in the comic book world, his work here suits the Alpha Gods stories superbly.  Pineda's work shines the brightest on the battle scenes, making them look exciting and hectic without looking cluttered.  There were certain panels that I found myself looking at more than once while reading this graphic novel just because of all the subtle little bits and bobs that he puts in to his work.  You really can look through the art and see something different each time.

All in all, if you have read the 'Betrayal' series already then this is a great release to pick up so you can see how it all began.  If you haven't read that series then get this release anyway and use it as your introduction to the Alpha Gods world.  It works both ways and that is the mark of a good comic book.