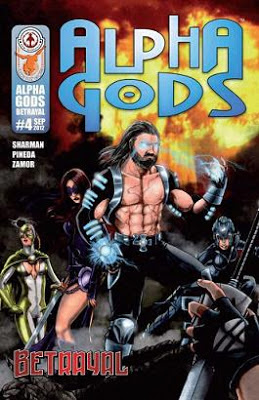 The Alpha Gods take on The Guardians of the New Humanity, a rogue group of Extra Humans fighting against human oppression.

Unknown to them, the DEHA have a secret agent working undercover within the group. What will happen when the two groups come face to face in a struggle for the future of their people?

The 'Alpha Gods: Betrayal' series has been a very exciting one so I was very eager to see what the next issue was going to bring with the now familiar characters.

This issue however was a complete change of pace and story line that came completely out of left field.

A new team called 'The Guardians of the New Humanity' have been terrorising places in the name of progress for their kind.  Bombings have got the city in fear but luckily the DEHA have got someone in the team undercover to try to halt their operations.  That's when the Alpha Gods appear to battle the team.

The ongoing storyline with Cravely and the Nephilim take a little bit of a backseat in this issue, instead it focuses on  the team of terrorists and DEHA's attempt to infiltrate them.

While the story for that really moves along at a cracking pace I just wished I could have seen a bit more of the storyline.  I really liked the new group 'The Guardians of the New Humanity' and would have loved the team to have been fleshed out a little more but that's a minor flaw in this exciting issue.

One of the main strengths of this issue is that we're so well used to the characters that the little nuances Sharman puts in to his writing really raises the quality of the story.  He throws in loads of little Bendis like nods to the other characters and some great little hints as to how the series main storyline is going to progress and I for one, can't wait to get to issue 5 and see just where Sharman is going to take the story next.

Art wise Pineda does a superb job of keeping the characters and the story fresh by adding some subtle changes here and there.  The new characters that are introduced in this issue are drawn superbly and really look like they belong there.  I am definitely going to be checking out more of Pineda's work because he has a great style.

With the twist at the ending, I am very eager to get to the next issue.  I, for one, can't wait to see just how Paladin are going to stop the Nephilim and Cravely..  A series well worth picking up.