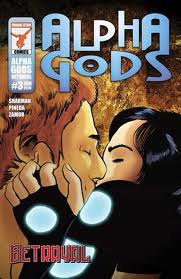 Returning from their mission at Mount Ararat, tensions rise and tempers flare among the ranks of the Alpha Gods. The secrets of Nyssa's past with Paladin are revealed and Outrage and Juice get close in the third installment of this action packed series.

The Alpha Gods return fresh from their action packed battle at Mount Ararat with a team full of tension, mistrust and secrets but revelations galore in this, the third issue of 'Alpha Gods: Betrayal'.

Throughout the first two issues, we have seen tensions rising in the Alpha Gods team, lots of little nods to there being a past between Nyssa and Paladin and a mysterious person named Agent Omega has appeared.  I have been really interested by all the stories that run parallel to one another because Ian Sharman has a knack for giving away just enough information to whet your appetite for the next issue.

That approach works really well with the mixture of styles in his writing.  At one point, the story moves along at a slow and subtle pace, letting the characters develop at their own speed and then, without warning, it turns action packed.

That's prevalent  here big time.  A lot of this issue is given over to two things.  The back story between Nyssa and Paladin and the growing attraction between Juice and Outrage.

The revelation behind Nyssa and Paladin's past may not be the most original plot device but Sharman handles it with a gentle touch and makes it really feel like you are watching the flash back develop in front of your eyes.  While that does explain a bit about what happened between them, there's still an air of mystery that leads the reader to think that maybe there's more than meets the eye to this past.

The growing relationship between Juice and Outrage is deftly handled and really comes across as two youngsters finding themselves in the world.  The fact that they have special powers is just secondary to their  story.  It's beautifully done.

Artwise, Pineda has definitely kept the quality level up, even with this being more of a subtle issue than the first two.  He really does have an eye for details here and while the art in the 'quieter' scenes is just as good as the bombastic artwork used in the closing scenes.  Pineda really knows how to make Sharman's words come to life and that's no more evident than in the brilliant twist of the ending.  Absolutely superb.

This issue is definitely character development heavy but that is a good thing because it really helps you to get behind the characters themselves instead of them just being names and no personality, which is something I've seen in a lot of other superhero comics.  There's also a very good twist at the end that has left me very eager to get to issue 4 to see just where Ian Sharman and his team take the team.