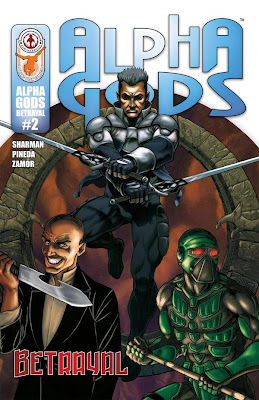 After rescuing a mysterious girl from the clutches of the evil Lester Cravely, the Alpha Gods learn that he has been sent to retrieve a mystery artifact and set out to stop him but what will await them when they get there and what role will the mysterious girl play?

The first issue of 'Alpha Gods: Betrayal' set the scene for this story arc really well and did a good job of laying the groundwork for what was going to happen next.  It's also did a good job of introducing the characters to a new fan such as myself.

The story picks up exactly where it left off in issue 1, with the Alpha Gods trying to make sense of what happened while rescuing the mystery.  While some of the smaller questions are answered, Sharman does a fantastic job of keeping the other questions in the air while giving the reader little tidbits of information that will keep you coming back for more.

We get a little bit more of the background between Paladin and one of the women working alongside Cravely.  I won't spoil who it is for you here but you're not quite sure whose side she appears to be on.  I've always loved that style of writing and boy does Sharman do it with class.

The art is bright, busy and exciting, which works brilliantly well for this tale.  The best example of this is in the massive battle scene between the Alpha Gods and Cravely's motley crew of evil doers.  There's a really cool cinematic meets anime feel to the battle.

All in all, another well done for Ian Sharman and his team.  Alpha Gods really seems to improve with each issue so far and there's only been two issues!  If this is how good the first two are, I can't wait to get to the third issue.  It's going to be a blast.

Posted by Pat Scattergood at 12:16