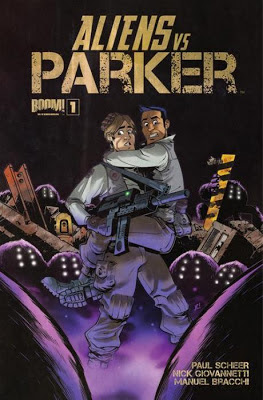 From comedian Paul Scheer (NTSF:SD:SUV::, THE LEAGUE & HUMAN GIANT) and writer Nick Giovannetti (MTV, ADULT SWIM) comes a sci-fi action comedy for fans of SHAUN OF THE DEAD and ALIENS!

Set in the not so distance future, a group of slacker delivery guys spend their days avoiding responsibility and playing video games, until one day they deliver a classified package to a mysterious planet.

A lot of people have been comparing this title to 'Galaxy Quest' and even saying that it's a science fiction 'Shaun of the Dead', but do they really deserve those plaudits?

While at the heart of it, this is a very funny and well written issue that really had me laughing in places, it just didn't grip me as much as I was hoping it would.

That said though, the characters seem very well written and they inhabit this issue really well.  That's probably helped by the main character Parker.  He's a bit of a loser, a bit of a klutz.  That's especially true when the Marines turn up to look around their shit but bring a woman aboard with them.  He becomes a complete puppy dog in front of her and it's hilarious.

However some of the best lines come from one of the background characters saying random and inappropriate things.  It just reminded me so much of the sort of stuff you'd get up to you and say with your friends around you.

The art is pretty good for this issue, although the artist isn't really given that much to do until the end of the issue.  That said, the panels look clean and crisp and he does a really good job of making the space ship look old and run down.

All in all, I wouldn't say this is an essential purchase or even one you would come back to again and again but it is a very funny release that will perk you up as a quick distraction..