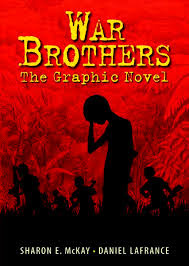 Much has been written about the Lord’s Resistance Army in Uganda, where, under the leadership of the infamous Joseph Kony, young children are kidnapped and forced to become rebel soldiers. Author Sharon McKay, whose research often involves spending time in the countries she writes about, traveled to Gulu, Uganda to record true-life accounts from Kony’s victims. Their stories are full of horror, but they also capture the resilience, friendship, and courage that these children experienced.

Based on Sharon’s interviews, War Brothers was originally published as a novel in 2008. It tells the harrowing tale of 14-year-old Jacob who, along with his friends, is brutally abducted and pressed into service as a rebel soldier. Together with hundreds of other children, he is forced to commit brutal acts. Convinced that he and his friends will somehow be rescued, he struggles to hold on to his sanity as time passes with no sign of help. Finally, Jacob engineers a daring escape and returns to his village only to discover that he and his friends are feared and reviled as former child soldiers.

In this graphic novel version of War Brothers, artist Daniel Lafrance captures the terror, poignancy, and hope expressed in the text. In the best tradition of the graphic novel, this one brings an immediacy and power to a story that will sear itself into the mind of every reader.

Originally published in 2008 as a novel, 'War Brothers' was a harrowing tale of the life led by a child soldier forced to commit brutal acts.

Here it has been adapted by the author alongside the artist Daniel Lafrance in to a graphic novel but does it retain the power  of the original novel?

That question is answered with a simple yes and then some.

If anything the graphic novel is more powerful than the novel itself because of how well the author and artist  have worked together in adapting the book.  Sometimes an adaptation just doesn't work as well as it should because the people making it aren't in tune with one another but here they appear to have gelled perfectly.

Sometimes, a graphic novel will come along and stay with you long after you have finished it.  In fact, on those moments that release just stays in your mind and you can't stop thinking about the things that happened in the story itself.  The last graphic novel I've read that had that effect on me was 'The Watchmen'.  Until now.  'War Brothers' is brutal, hard hitting and a massively heartbreaking read.  Just knowing that this actually happened to the children and that their childhoods were ripped away in such a brutal way made this a release that really should be shown to anyone that wants to learn about the brutalities that have been going on unabated for years.

The art by Daniel Lafrance shows just what happens perfectly and really compliments the intelligent and hard hitting writing.  His particular style really rams home the brutality of what happens to these children without going over the top or slipping in to melodramatic panels.  In fact, I would even go so far as to say this is some of the most perfect art I've seen for a release for a long time.  I haven't seen art that's so suited to a release such as this before.  It's almost as if the art was done first with the writing fitted around it.

Is this release a hard read?  Yes because it's absolutely harrowing what happens to those poor child soldiers only for them to get out of that situation only to be treated like they're worthless because they were forced in to being child soldiers.  The writing is intelligent and the artwork by Daniel Lafrance fits Sharon E. Mackay's writing like a glove.  They just gel so perfectly together.

I don't give 5 out of 5's out very often but it's well deserved here.