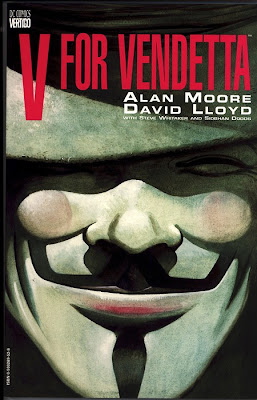 A new trade paperback edition of the graphic novel that inspired the hit movie! A powerful story about loss of freedom and individuality, V FOR VENDETTA takes place in a totalitarian England following a devastating war that changed the face of the planet.

In a world without political freedom, personal freedom and precious little faith in anything comes a mysterious man in a white porcelain mask who fights political oppressors through terrorism and seemingly absurd acts.

It's a gripping tale of the blurred lines between ideological good and evil. This new trade paperback edition of the classic series from writer Alan Moore (WATCHMEN, LEAGUE OF EXTRAORDINARY GENTLEMEN) and artist David Lloyd (HELLBLAZER) collects the epic miniseries.

This is the book that changed the way I viewed the world, it taught me that every action has a consequence, it is probably the most important book I have ever had the pleasure of reading (thanks Uncle Paul).

Set over 3 books, book 1  Europe after the Reign, starts in what was then a futuristic 1997, after a nuclear war, which destroyed most of the world but left England  in a totalitarian state, a 16 year old Evey Hammond is going to go out in the night to earn more money, despite there being a curfew in place, she gets picked up by a group of Fingermen (plain clothes state police) who are about to attack her when V appears and rescues her.

What then follows in at its simplest a damn good story of revenge and love, but the closer you look at this book the more it reveals.

Excellently realised characters really leap off the page at you, not everyone is nasty but they all have a role to play in V's plan for revenge

Book 2, This vicious cabaret, follows V attacking the establishment and starting to prepare his successor

Book 3, The land of do as you please,  Things come full circle and the ending although shocking makes perfect sense,

The artwork is beautiful, and coloured in pastels the story by Alan Moore is complex and multi-threaded, you need to put work in to get the most out but this book more than repays you.

Posted by Pat Scattergood at 12:29