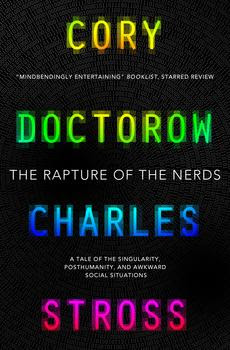 Welcome to the fractured future, at the dusk of the 21st century. Earth has a population of roughly a billion, living in a preserve at the bottom of a gravity well.

Young Huw, technophobic, misanthropic, has been selected for Tech Jury Service, a task he does his best to perform despite an itchy technovirus, the apathy of the proletariat, and some truly awful moments on bathroom floors.

Charles Stross and Cory Doctorow are very good authors, so when this collaboration was announced I had very high hopes for it.

Were those hopes lived up to or were they dashed?

Well, it's a yes to both of those questions.

On the one hand, this is a good story with some flashes of absolute brilliance.   The story itself has some superb ideas and asks some rather interesting questions about mans reliance on technology, a theme well used in both Stross's and Doctorow's other work.

That's also part of the problem here.  If you have read either of this guys work before then it will feel a little bit like you are going over an overly familiar path and that's a real shame.

Another problem with the book is that the sheer amount of ideas used are just way too many.  Don't get me wrong, I'm all for writers using all their ideas or trying something new but this book took that way too far to the extreme side of it.  The best way I can think of describe it is that Stross and Doctorow threw as much at the wall to see what exactly would stick.

That said, I did enjoy the book for the most part.  I really liked the gender shifting love interest for Huw but at times, the character would one moment be really well written and then be a caricature the next.

Doctorow and Stross are superb writers on their own but with this title, instead of giving us the classic that we all know that they are both capable of, we've been given a book that takes the scattergun approach.  At times it even felt like they were both going out of their way to outdo one another with the geeky and sometimes obscure references.

All in all, I did enjoy the novel.  There were parts I really liked and parts that I didn't like.  Instead of having a classic here, we merely have a book that was good and a little schizophrenic in places.   A shame really as I had really high hopes for this one.

The Rapture of the Nerds is peppered with references to pop-culture staples (The Matrix, Doctor Who, The Hitchhiker’s Guide to the Galaxy amongst others). To be in with a chance of winning a SIGNED copy of Rapture of the Nerds tweet the fictions piece of technology that you would most want let loose in the real world @doctorow @csross @titanbooks #RaptureoftheNerds. The co-authors will vote for their favourite fifteen pieces of tech and each top tweeter will be sentenced to a free copy. The Jury is still out. Good luck.
Posted by Pat Scattergood at 22:27