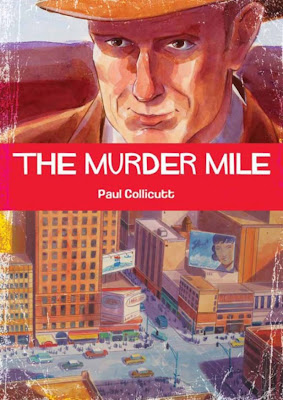 Arizona, 1954.  When promising mile runner Todd 'The Phoenix Flyer' Naylor turns up dead in the desert, the case falls to Daniel Stone.

A private investigator with a passion for track and field, Stone soon finds himself tangled in a web of conspiracy and corruption - there's more to this death than meets the eye.

As the international battle to break the four-minute mile barrier intensifies, Stone  races to unravel the mystery and prevent further deaths.  But will he make it in time?  And who do you trust when you're running the Murder Mile?

I have to admit  that I hadn't seen any of Paul Collicutt's work before I got this graphic novel but sometimes that's the best way to find new artists or writers to read.

Coming  in to this graphic novel, I wasn't sure just what to expect.  The write up on the back sounded really interesting and the art made it look a lot different to some of the other releases out there but was it a case of style over substance?

The answer is no.  This graphic novel is an absolutely brilliant addition to the collection for so many reasons.

Writing wise, it has a bit of a film noir meets 'Chariots of Fire' feel to it.  Set in the world of track and field while every runner is trying to break the four-minute mile, the story itself came across as really exciting and had me on the edge of my seat more than once.  In fact, while I personally hate the term 'page turner' that perfectly sums up this graphic novel.  With each clue and each discovery, it felt like you just had to read on to see what was going to come up next.  The theme of the graphic novel would feel out of place in a Humphrey Bogart movie.  One of the things that I felt raised it above the other detective graphic novels out there was the simple fact that the fictional story was placed into real life events featuring real life athletes without feeling out of place.  In fact, it felt like it truly belonged there and that is down to the strength of the writing.

The only part of the story that didn't really click for me was the love interest part of the story.  It just didn't seem as fully fleshed out as the others and kind of felt like it was just tacked on for the hell of having a love story during the investigations.

However, it's the art that truly made this graphic novel stand out for me.  The painted style of the panels really made the scenes come alive, especially in the racing parts of the story.  The art also really gave the story a vintage feel as well, just like if you were watching a classic movie.  I would definitely be on the look out for more of his book if it's as good as his work here.

All in all, this is a very good graphic novel to pick up and well worth a read.  While the love interest part of the story didn't work as well as the rest of the story, it's still a very well written detective story with some brilliant twists and turns that kept me guessing until the very end of the story.

Posted by Pat Scattergood at 07:20