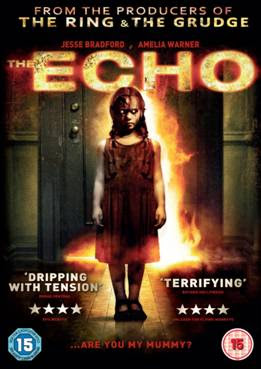 An ex-con moves into an old apartment building, where he encounters a domestic problem involving a police officer, his wife, and their daughter.

When he tries to intervene, however, a mysterious curse entraps him.

'The Echo' is a remake of a Filipino movie entitled 'Sigaw' directed by Yam Laranas, who also directs this version as well.

Originally shot in 2008, it's finally finding distribution thanks to those wonderful folks at Metrodome and I, for one, am glad about that because of one simple reason.

It's a very good movie.

For once a remake actually does the original justice.  In fact, I would say that both this version and the original are pretty even quality wise and you don't get that very often in this stale movie watching world these days.

The movie starts with a slow and deliberate pace.  If you're not paying attention then you will think that not a lot is happening and that would be a real shame.  The slow pace and subtle shooting style really help to build up the tension and the characters.  It's true that you don't get to learn everything about the characters themselves but you learn enough to actually feel like you're in their mind.

One of the things I really liked was Jesse Bradford's performance as the ex-con who moves in to his dead mothers  apartment.  While not the most original of characters in the horror world, his performance raises him above what would have other wise been little more than a stock character.  Bradford really does give a steady but emotional performance as Bobby and that really gives the movie it's heart.

The scares were also quite well done in that they combined the sorts of scares that mess with your mind and the jump scares that are in a lot of recent horror movies in a great way.  The combining of the two types of scare should have made the movie disjointed but here, it worked.

While it's true that this isn't the most original movie you are ever going to see, it would be a real shame to just dismiss it as a stereotypical 'haunting' movie.  It's a hell of a lot better than that.  It's a subtle, well made movie with a story that is both gripping and methodical at the same time.

Well worth a watch for you horror fans out there.