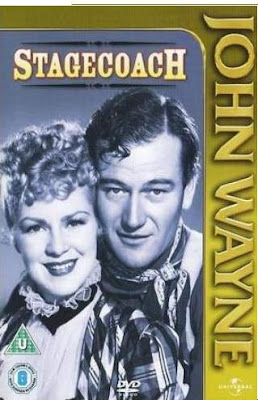 
One of the all time classic Westerns - considered by many to be the movie that propelled John Wayne to stardom back in 1939.

The film is set against the impressive backdrop of Monument Valley in Utah and tells the story of a mixed group of travellers who are making their way across country to Arizona.

They are endangered by an Indian War Party, and this along with their various characters results in difficulties for the party...

Review
Widely regarded as the movie that gave the now legendary John Wayne his breakout role, Stagecoach is much more than that. It's a double Academy Award winner as well, winning the Academy Award for Best Music/Score and for Best Supporting Actor in the shape of Thomas Mitchell as Doc Boone.

In fact it's a brilliantly written and in depth character piece examining how a group of people who are all widely different cope with the threat of an Indian War Party.

The group of 9 people are filled with some absolutely fantastic characters played by some great characters.

Claire Trevor gives a fantastically subtle performance as the prostitute Dallas who is one the stagecoach after getting thrown out of town by the Law and Order Brigade.

However it's Thomas Mitchell as the alcoholic Doc Boone that gives one of the best performances of the movie. He plays the characters descent in to drink and then eventual salvation with such a grace and poise in his portrayal that I couldn't take my eyes off of the screen whenever he was in the scene.

Andy Devine plays Buck, the stagecoach driver, who amidst all the tension and twists provide a bit of a comic touch to proceedings. At certain points in the movie, he had me howling with laughter with his gentle yet funny performance.

I would be very remiss if I didn't at least mention John Wayne wouldn't I? It is incredibly easy to see his star quality here. While he doesn't have the presence and commanding nature that he would have in later movies, he still gives a very good performance as the fugitive The Ringo Kidd.

The direction of the incredible John Ford here is up there with his best work by far. He manages to get some brilliant performances from the entire cast while really grinding up the pressure level as the movie goes on. While the threat of the attack is the thing that keeps the movie moving, it's not the be all end all of the movie. It's the relationships between the characters that absolutely set this movie apart from the other westerns of the time.

However that's not the best part of the movie. By far it is the truly incredible and amazing stunts by the legendary Yakima Canutt. Some of the set pieces really do have to be seen to be believed. The best of this being the exciting conclusion of the movie.

If you like westerns of any kind, stick this in your DVD player, kick back and enjoy one of the best that has ever been made.
Movie 4.5/5
Picture 3.5/5
Sound 4/5
Special Features N/A
Overall 12/15
Posted by Pat Scattergood at 02:38