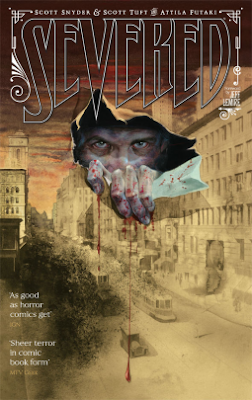 1916. A man haunts the roads; a man with sharp teeth and a hunger for flesh. When 12 year-old Jack Garron runs away from home, he'll see how quickly the American Dream becomes a nightmare.

Collecting all 7 issues of the critically acclaimed series, and featuring never-before-seen bonus material, this hardcover deluxe version is sure to be a classic.

Scott Snyder appears to be the latest comic book darling that can do no wrong at the moment and as such, fans are jumping all over his work to see what he is going to do next.

Does this title deserve that sort of attention?

While I think that Snyder is a functional writer and can do very well depending on the story  that he's writing, this one just didn't do anything for me.  In fact, it came across as a bit safe and a bit bland and that's a real shame because there was a mass of potential for this tale.

The problem with this story is a simple one really.  The subtle writing does work well in places but that's part of the trouble.

Story wise it's built up very well with some good twists and turns but the ending falls really flat for me.  This graphic novel is a case of the build up being much better than the pay off and that really hurts the final story.

There's a really good cinematic feel to the artwork and it comes across as a bit like how the movie adaptation of 'Road To Perdition' looked.  It had a really authentic 'old time' look to it and the way the artist made good use of the settings and the shadows worked brilliantly.  However, the story didn't really give Futaki a chance to shine.  I know Futaki's work is very good and has a realistic feel to it but while here it was drawn really well, the story itself just didn't give the work a chance to come alive.

All in all, this isn't a bad story but it's not a great one either and after hearing all the good things about how good Snyder was, I had massively high hopes for this.  Sadly, it was a case of the hype hurting the story because Snyder played it quite safe with this story.  The art however is very good and atmospheric and that really bumps  up the quality of the story itself.

This one is definitely a case of it could have been so much better.

Posted by Pat Scattergood at 00:04