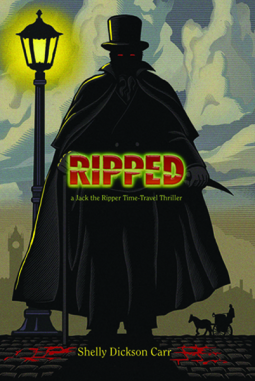 After her parents were killed, Katie left Boston to live with Grandma Cleaves in London. It still seems like a bad dream. But she's doing okay, even making new friends.

A bit of a history buff, Katie likes living in a city where so much has happened, likes walking the same streets as the authors of Dracula and the Sherlock Holmes mysteries. This cool, bookish teen is working on her British accent and even learning some Cockney rhyming slang from handsome Toby.

When a museum visit with friends turns funky, Katie finds herself in a long, uncomfortable dress, wearing a ridiculous hat. What happened to her jeans and high-top sneakers? Where's her iPhone? It's London, 1888. Smart, gutsy Katie realizes she's here to stop a serial killer. She can't bring her parents back, but maybe she can save these women. Katie 's read about the Ripper, knows the names of his victims, even knows where and when they were killed. She's watched her fair share of CSI, knows about profiling and forensics. Surely she knows enough to save the lives of his victims. But how will changing history affect the lives of those she loves most?

I am a massive Jack the Ripper fan and love all the various theories and ideas behind the identity of the legendary murderer.  I love the fictional accounts such as 'From Hell' and all the factual ones as well.  It just seems to be one of those mysteries that  seems to never want to pass.

When I saw this book was available and combined that legend with time travel, I thought I was in nerd heaven.

I must admit that while it was a little hit and miss in places, this is still a really good addition to the already vast library of books out there.

The characters for the most part are very well written.  They take a little while to get going, especially in the case of the main character, Katie, but they are pretty well done.

At the start of the book, Katie comes across as just mean and self centered instead of grieving but while the story goes on, it's almost as if the writer became more comfortable with the character herself.

Carr combines the Jack the Ripper and time travel parts of the story do combine pretty well.  I loved the descriptive writing after Katie had gone back in time.  It felt like Carr had found her favourite part of the story and really let fly because that's exactly the point in the book where the story went from being merely interesting to being really good.

The only problem with the writing I really had was the fact that nearly all the action came at the end of the book itself.  That made it feel like the action had been put in at the final minute to try to jazz the story up a little bit.  That's a real shame because I'd liked the slow and subtle approach the story had been taking up until then.

All in all, while there are a couple of disappointing moments, this is still a book worth picking up and giving a try.  The narrative flows well through the story and Carr makes good use of the time travel part of the story, even making it seem to be both completely different from the rest of the book but still managing to gel with it at the same time.

Posted by Pat Scattergood at 05:42