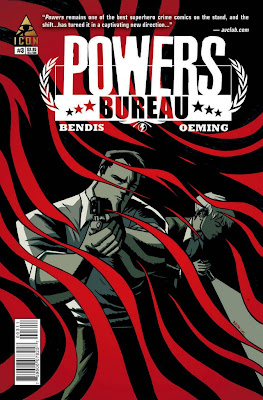 Another blockbuster chapter in the Eisner Award-winning cops and capes epic!

Now that all powers cases are federal cases, agents Walker and Pilgrim must learn to live by the new rules.

But how do you obey the rules when the bad guys ignore them?

After the slightly confusing ending to the second issue of 'Powers Bureau', I was hoping that the epic series by Bendis and Oeming would be back on track with issue 3.

I was most definitely more impressed with this one.  While the first two issues have been good, this one is by far the best of them.

The one thing I really like from the 'Powers' stories is that they don't let their characters get stale or boring, instead always making sure they grow emotionally.  As always the dialogue is delivered with such vivacity that you can't help but be drawn in to their world.

I have to admit that I honestly found moving Pilgrim and Walker was going to be a 'jumping the shark' moment but they've handled it really well.  If anything, it's improved the stories and the characters.  Also one of the things that amazes me is  the simple fact that despite the title being around since 2000, the characters always seem fresh and exciting.

That's definitely the case here in issue 3.  The case is moving on in leaps and bounds with some massively important moments that really blow the case open without giving too much away.  That really is one of Bendis's major strengths on this title.  He knows when to give the big reveal and when to tease the reader in to thinking they know the answers before throwing them a curve ball.

The art, as always, by Oeming is absolutely spot on.  He knows these characters so well that they look positively fantastic each time I read a new issue.  It's almost as if he can draw these guys in his sleep.  Oeming's eye for the little details is what always works superbly well on 'Powers' and that's no different here.  The facial expressions, the surroundings and more are all used to underscore the details that all add up to making 'Powers' one of the best titles out there.

Posted by Pat Scattergood at 01:41