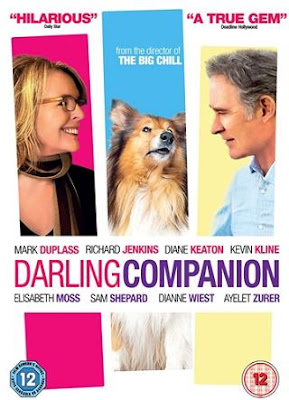 This is the story of a woman and a dog.  A woman who loves that dog more than she loves her husband, but then her husband loses the dog.

There was one a time when you saw the named Lawrence Kasdan attached to a movie, there was a guarantee that you were going to be watching a superbly directed movie.

Alas, that doesn't seem to be the case with this movie.  It's been a very long time since Kasdan's last movie, 'Dreamcatcher', and in that time he appears to have lost his knack for making a good and rewarding movie.

That's a real shame because this movie has an absolutely superb cast and an interesting sounding  story.  I thought that after seeing the cast list and seeing the synopsis that this was going to be a very good movie but instead we have got a cliched and quite boring movie.

The cast do the best they can with the 'hit and miss' dialogue but this is definitely a movie that can best be described as a wasted opportunity.

It's not the worst movie ever made but neither is it a good one.  However there are flashes of brilliance in this, especially in the shape of Diane Keaton and Kevin Kline, who played their parts superbly.  In fact, if it hadn't have been for their performances I probably would have turned the movie off halfway through.  Another thing I liked was the appearance of the massively under rated actor, Sam Shepard.

The special features included here are a bit like the movie.  Looks and sounds interesting on paper  but is executed really poorly.

This movie really could have been so much better than it ended up being.  In fact, with the cast that is included here it should really have been great.  Instead we have a movie that while heart warming and with two great performances by Kline and Keaton, just reeks of a missed opportunity.