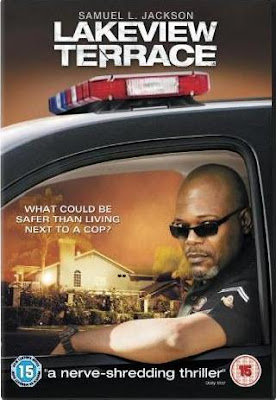 In Lakeview Terrace, a young couple (Patrick Wilson and Kerry Washington) has just moved into their California dream home when they become the target of their next-door neighbor, who disapproves of their interracial relationship.

A stern, single father, this tightly wound LAPD officer (Samuel L. Jackson) has appointed himself the watchdog of the neighborhood. His nightly foot patrols and overly watchful eyes bring comfort to some, but he becomes increasingly harassing to the newlyweds. These persistent intrusions into their lives ultimately turn tragic when the couple decides to fight back.

These days everybody wants to feel as safe as they possibly can in their own homes and that's a right that everybody should have.  So, for a newly married couple what could be safer than living next door to a cop?

Wrong.  What  we have here is a taut thriller that really plays a mind screw with the viewer thanks to the intelligent writing and great portrayals of the characters by the strong cast.

The best of these by far are Patrick Wilson, who plays Chris and Samuel L. Jackson, who plays Abel.  The way the two characters bounce off of one another works incredibly well.

On one side of the coin you have Patrick Wilson's portrayal of Chris, a young man in an interracial relationship.  Together they move in to a house in what looks to be a smart and safe neighborhood.  Slowly but surely as the movie goes on, the strain really gets to Chris and Wilson portrays that brilliantly and in a subtle way.  Normally in these kinds of movies, the story gets ruined by an overly dramatic performance that veers in to melodrama but not here.

On the opposite side of the coin, you have Samuel L. Jackson as Abel.  Jackson normally plays one of two different kinds of characters.  The loud bombastic kind of anti-hero (like in 'Pulp Fiction' and 'Snakes on a Plane') and the quiet yet menacing parts (like in 'Black Snake Moan').  Here Jackson combines the both brilliantly.  You can just see in his eyes the need to go supernova yet he plays it quietly and with menace just bubbling under the surface.  In fact, the performance makes your skin crawl, albeit in a good way if that makes sense.  You're watching this man try to absolutely destroy this young couples life by going further and further to the extreme and you can't help but keep your eyes on Jackson throughout the entire movie.

The special features are pretty good for this release and really give a good behind the scenes look at both how they made the movie and also how they were inspired to write it.  I really liked the reasons they gave for the deleted scenes having been taken out as well.

All in all, this is a very good and taut thriller that had me on the edge of my site throughout the movie.  The only part of the movie I didn't like was the ending that felt like it came completely out of left field as the old saying says.  They'd built  up the characters really well, especially that of Abel, but then did a complete 360 at the end.  Instead of being the subtle, menacing villain of the movie that was content to make the couples life hell, they ramped up the crazy a little too much and because of that, it became a little melodramatic for my liking.

If you are a Patrick Wilson or Samuel L. Jackson fan then this is a movie well worth picking up, especially if you like taut, well paced thrillers.

Posted by Pat Scattergood at 09:40