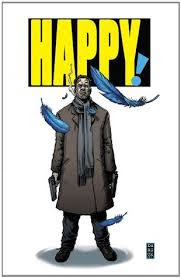 With a hit gone wrong, a bullet in his side, the cops and the mob on his tail, and a monstrous child killer in a Santa suit on the loose, Nick and his world will be changed forever this Christmas — by a tiny blue horse called Happy!

Collects issues #1-4 of the mini-series.

Grant Morrison has always been a favourite of mine.  A man who always has an eye for exciting stories full of twists and turns but with great characters.

This release is full of that and more.

Here, Morrison has crafted  a an 'edge of the seat' tale about the man adrift in the sea of filth that surrounds him on an everyday basis.  He's a drunkard, foul mouthed and a killer.  But when he starts to see a child's imaginary friend called Happy, it leads him on a path that will change his life.  Will it change it for the better?  Well, you'll have to read the graphic novel to find that out but the writing here makes would could have been quite a cheesy concept in someone else's hands in to an absolutely superb story.

In fact, Morrison has written a story that is fast paced, action packed but also incredibly emotional.  The twists that he put in to the story worked really well.  A couple of them even surprised me.

The art here by Darick Robertson fits the story itself like a glove.  It's been a long time since I saw art that was so good that you couldn't possibly imagine any other artist working on the story.  I hadn't seen much of Robertson's work before this but I'll definitely be looking up more of it after reading this.  I especially loved how he combined the gritty nature of the art for the main characters with the cartoon style illustration of the imaginary character.  Somehow he made something that shouldn't have worked together work really well and made it match the story fantastically.

This is a superb release by Grant Morrison and Darick Robertson.  I would honestly put it up there with some of the best work that Morrison has done in a long time.  Somehow they have taken an idea that on paper sounds like it would come across as rather silly and made it in to a gritty and exciting story.

Definitely well worth picking up, especially for you Grant Morrison fans out there.

Posted by Pat Scattergood at 10:12