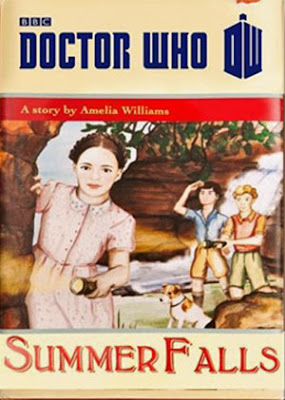 “When summer falls, the Lord of Winter will arise…”

In the seaside village of Watchcombe, young Kate is determined to make the most of her last week of summer holiday. But when she discovers a mysterious painting entitled ‘The Lord of Winter’ in a charity shop, it leads her on an adventure she never could have planned. Kate soon realises the old seacape, painted long ago by an eccentric local artist, is actually a puzzle. And with the help of some bizarre new acquaintances – including a museum curator’s magical cat, a miserable neighbour, and a lonely boy – she plans on solving it.

And then, one morning Kate wakes up to a world changed forever. For the Lord of Winter is coming – and Kate has a very important decision to make.

After reading the Melody Malone book that accompanied the episode 'The Angels Take Manhattan', the thought of another episode tie-in book kind of left me wondering if they were going on a bit of an overkill kick.

I need not have worried.

What we have here is a short novella that is equal parts Enid Blyton  and Doctor Who.  For some that might sound a bit of a turn off but that's not the case here.

Here, James Goss, writing as Amelia Williams, has crafted a fun and fast paced story that is both perfect for the older fans and for the younger ones maybe discovering the magic side of the series for the first time.  For the older fans, not only are there lots of nods to the show itself but there are also a myriad of clues to the identities of the characters as well.  I, for one, enjoyed seeing all the little pointers and clues.

For the younger fans out there, this is a rollicking story full of twists, turns and magic as well as some really exciting moments that will keep them on the edge of their seats.

While some of the moments of the book aren't exactly subtle, one of the characters is definitely based on the Doctor to such an extent that you can't help but read his dialogue in his voice, and there are some really amateur style editing mistakes, those are just really minor complaints in all honesty.

In the episode 'The Bells of St John', which is where this book came from, Clara mentions chapter 11 being the best but it being the chapter that would make you cry was definitely a prophecy that fulfilled itself when I read the story.  That chapter was written with such a gentle touch that I honestly couldn't stop my eyes from welling up.

As both a fan and a massive book worm, I really enjoyed this story and am going to enjoy reading it to my son, who I've recently introduced to the world of Doctor Who.  Plus considering how cheap it is on the Kindle, Kobo and other E-Readers, what's stopping you from getting this?

Posted by Pat Scattergood at 01:05