Doctor Who: Magic of the Angels By Jacqueline Rayner Review 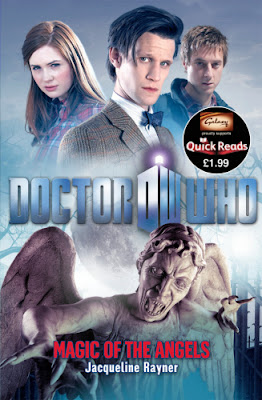 
'No one from this time will ever see that girl again...'The Doctor, Amy and Rory round off a sight-seeing tour round London with a trip to the theatre. That's when things start to go wrong.

The Doctor wonders why so many young girls are going missing from the area. When he sees Sammy Star's amazing magic act, he thinks he knows the answer. Sammy's glamorous assistant disappears at the climax of the act - but this is no stage trick.

The Doctor and his friends team up with residents of an old people's home to discover the truth. And together they find themselves face to face with a deadly Weeping Angel.

Whatever you do - don't blink!

Magic of the Angels is a brand new adventure for the current Doctor, as portrayed by Matt Smith. Released to coincide with World Book Day as part of the Galaxy sponsored Quick Reads campaign to get more people to read books, this is a short but quick paced adventure.

Jacqueline Rayner, author of other Doctor Who novels such as 'The Stone Rose' and 'The Sontaran Games', has created an adventure that packs a lot of excitement in to such a small book.

While the writing is quite simplistic in places due to the book mainly being aimed at the younger teenage market, there is more than enough here for the older fan as well. The story is quite hard hitting in places and really packs a wallop in the emotional stakes as well.

The characters are well written and Rayner has done a very good job of keeping them as true to the television portrayals as possible. In fact, she's keep the characters so close to their counterparts that you can't read the tale without imagining Matt Smith, Artur Darvill and Karen Gillan running around.

The storyline itself wouldn't be out of place in the television series itself. In fact I wouldn't mind seeing it on the screen itself.

Definitely well worth a read.

Posted by Pat Scattergood at 12:52