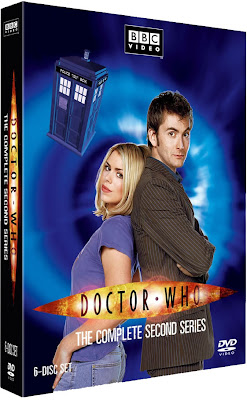 In this series, the tenth Doctor, takes companion Rose Tyler (Billie Piper) to New Earth and struggles to overcome the effects of regeneration.

In the opening Christmas episode London is deluged by Santa Claus impersonators and Christmas trees intent on malice. Mankind is threatened by a planetary invasion and there's only the Prime Minister to battle it out.

Episodes are: 'The Christmas Invasion,' 'New Earth,' 'Tooth And Claw,' 'School Reunion,' 'The Girl In The Fireplace,' 'Rise Of The Cybermen,' 'TheAge of Steel,' 'The Idiot's Lantern,' 'The Impossible Planet,' 'The Satan Pit,' 'Love & Monsters,' 'Fear Her,' 'Army Of Ghosts' and 'Doomsday.'

Series 2 and we have a new Doctor (David Tennant) who has some big shoes to fill.

And fill them he does, superbly in fact, his doctor is kinder and more approachable than Ecclestone's but has a darker side to him. You can see that DT loves the role and brings a much more energetic Doctor to the screen.

His tenure started with the first (and best) Xmas special, 'The Christmas Invasion.'

Set straight after 'Parting of the Ways' a newly regenerated (and unstable ) Doctor takes Rose home for Xmas and then falls unconscious just as the Sycorax invade earth leaving Rose to fend for herself, which she does and ends up on the Sycorax ship with the Tardis, suddenly in possibly a moment that makes everyone cheer, the Tardis translation circuits start working and you know the Doc is about to make his appearance.

And DT nails it from minute one, a fantastic performance with possibly the best question ever asked, "Am I ginger?").

This episode bodes well for the series future and is how Xmas specials should have been, add to this the first mention of Torchwood and this is one not too miss.

So onto series 2 proper, and it is another triumph with only 2 duff episodes (more on these later) it is easily as good as series 1 and the ending brings a tear to the hardest of hearts

Sarah Jane Smith, K9 and Rose as a dinner lady, what more could you want? Chips? It's got those as well

Girl in the Fireplace

New Who does old style base story and aces it, excellent cast top effects and Ood, lots of Ood

Ghosts are appearing all over the world but what are they? We finally meet Torchwood plus the saddest ending ever

Sorry to say but these are the two worst episodes ever. I refuse to watch them again. Poor story, waste of a stellar cast in L&M. Trust me AVOID

Posted by Pat Scattergood at 12:11