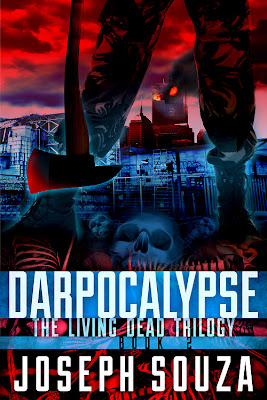 The second wave of the plague has struck with a brutal vengeance and a full-on zombie apocalypse has spread throughout every corner of the world.

Abandoned by her father, Dar has managed to set up a camp in the Boston Common. Surrounded by hordes of ravenous zombies, one person living inside the camp holds the key to their survival.

A few lucky people on Earth have developed a mysterious immunity from the plague. Known as ghosts, they are prized for their ability to walk among the dead and gather food and supplies without fear. The Boston camp harbors one such person, and President Roberts orders the Army’s finest soldier to bring their ghost to Washington, D.C. at any cost.

As the world descends into apocalyptic madness, the horde grows increasingly aggressive, threatening the well being of every survivor in Dar’s camp. Boston Common becomes ground zero for a dramatic showdown, and Dar realizes that she must make a decision that threatens not only her life, but the survival of every person she’s been entrusted to protect.

'Darpocalypse' is the second novel in the 'The Living Dead' series of novels by Joseph Souza.  The first of which, The Reawakening, was soundly thumped by critics for apparently taking 'liberties' with the zombie genre.  As a reader, I thought that was incredibly unfair considering just how brilliant the book was so I went in to reading book two with very high hopes.

I have to admit right now that those hopes were not only met but surpassed.

As much as I enjoyed the first novel, I felt the characters could have been a little more well rounded and Souza has more than taken that into account here.  In fact, the characters that you grew to know by the end of the novel are here and accounted for but their back stories have been fulled out.  Not all the way mind you, there are still some great moments of mystery in which you're just not sure who is on who's side.

I've always loved that about Souza's work.  He has the ability to keep you guessing about a character right until the very last sentence and the fast pacing really manages to get a ton of action in but not at the expense of the characters.  Here he has taken the characters and added many layers to them.  Dar is a real stand out.  I loved how at times you see the power of being in charge go to her head but then at the same time you also see a girl who just wants to survive.  In other less capable hands the character could have just been a bossy and unlikeable character but here there are times when you hate the character for the things she does and then other times Souza can make you feel incredibly sympathetic to her.

Another character that stands out for me is Brabas.  I absolutely loved how well written the character was and where Souza took the characters journey.  I loved just how when he got a certain ability and the power most definitely went to his head.  I couldn't wait to see what was going to happen next on the character's journey.

One of Souza's strengths here as a writer is the power of his skill of descriptive style of writing.  Everything seems real and as if you are really watching it unfold.  The last horror writers that have had that effect on me were Stephen King and Dean Koontz so he's in very good company there.

All in all, I liked this a lot better than the first installment, which I really liked but that has lead to one major problem.  It's put a hell of a lot of expectation on to the third book and you know what?  I can't wait to read it!  Bring it on!

Posted by Pat Scattergood at 11:14