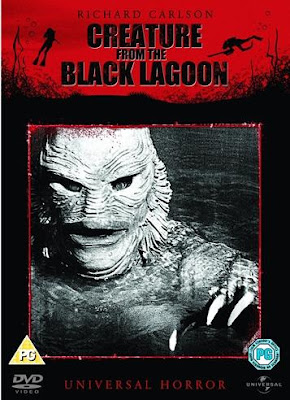 Written By Harry Essex, Arthur A. Ross and Maurice Zimm Based on an Idea By William Alland
Directed By Jack Arnold

Scientists drug and capture the creature, who becomes enamoured with the head scientist's female assistant.

The lonely creature escapes and kidnaps the object of his affection., leaving it up to the chief scientist to rescue his assistant and cast the ominous creature back to the depths from which he came.

'Creature From The Black Lagoon' was the last of the truly great Universal Horror movies that started with such classics as Dracula, The Wolf Man, Frankenstein and many more.  All of these established their characters as real creatures and people in the hearts and minds of movie fans everywhere.

Sadly, The Gill Man, from this movie was quite overshadowed by all of those and that's a bit of a shame.  While the movie itself is still seen as a classic, it's not held in as high regard as the movies I mentioned before.  That's a shame because I honestly think that the creature really is one of the best that Universal ever created.  Not only does the creature scare the viewers but there is also a real sympathetic heart to him too.  You even end up feeling sorry for him during parts of the movie despite the death happening all around him.

The performances here are all good to great and the characters themselves really add a layer of charm to proceedings.  The best of the performances by far are those of Ricou Browning and Ben Chapman  as The Gill Man.  Both give the character itself a sense of anger and grace yet at the same time manage to make him seem hurt and human no matter what foul deeds he commits.

There are some great special features here as well, especially the incredibly interesting documentary that really goes in to depth as to not only how they made the movie but how a lot of the iconic moments happened.  I especially liked hearing about how the design of the creature itself came about.  The commentary is very well done too and really goes in to some really interesting behind the scenes stuff too.

I honestly hold this in as high regard as the legendary Universal horror movies such as 'Bride of Frankenstein', 'Frankenstein', 'Dracula' etc.  In fact, I would even go so far as to say that this is an  absolutely essential purchase not only for horror fans but for movie fans full stop.

Posted by Pat Scattergood at 15:46