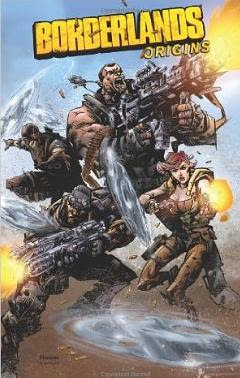 For the millions and millions of fans of the smash-hit video game Borderlands, a lingering question exists: how did the Vault Hunters get on the bus with Marcus in the first place?

Find out how Roland got on the bus with Mordecai, Lilith, and Brick in this exciting look at the soldiers of the Crimson Lance and what made him leave their ranks and search for the Vault.

As a fan of the 'Borderlands' computer games, I was really looking forward to these stories telling how each of the main characters ended up on the bus with the character Marcus.

I was expecting loads of twists and turns, some balls to the wall action and some interesting back stories to the characters.  Did we get that here?

The stories are functional for want of a better word.  They're good for what they are but there really does feel like there is something missing from the stories.  Another thing about the stories that bugged me was that considering that being on the bus is a major plot point, these issues showing how they got there to begin would be really exciting and hopefully last after you have finished them but they just don't have that wow factor to them.

Writing wise, they're not terrible.  That said they're just not  gripping for me as a reader.  The first issue featuring the story of Roland is by far the best of the ones here but afterwards, the collection of four issues just goes downhill for me.  The second story by far showing how Lillith found our about being a Siren felt majorly lacking and didn't really seem to go anywhere.

The art by Agustin Padilla suffered the same fact as the stories themselves.  While not terrible, the art is functional at best.  The part where it suffers the most are the battle scenes.  Yes they are colorful and well drawn, it's just that for me as a reader they didn't look all that exciting.  I've never been that big a fan of Padilla's work but I don't think he's as bad as a lot of reviewers have made him out to be.  I just think that his art here was a little simplistic and not gritty enough to be able to pull off the story.

All in all, this was quite a disappointing release.  It showed a lot of promise but just didn't fulfill it and as a fan of the games, that's a real shame.  Only buy if you really must have everything to do with 'Borderlands', otherwise maybe just borrow it.

Posted by Pat Scattergood at 13:40