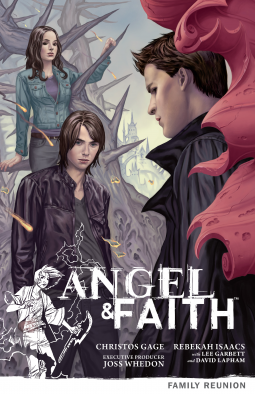 Angel’s quest to resurrect Giles has brought an old friend to London—Willow!

Tensions run high as these two confront the loss of Giles, but before blood can be shed, Willow has a proposition. She’ll help Angel on his quest if he’ll help her find magic. To do that, she’ll need Connor to get them into Quor’toth, a hell dimension where magic runs deep.

I was really looking forward to this release as it was written by Christos Gage, writer of 'Avengers Academy'.  I've always find his writing to be exciting but at the same time quite character driven and that's most definitely the case here.

The story itself wouldn't have been out of place in either the 'Buffy' television show or the 'Angel' television show.  I'll admit that I hadn't been keeping all that up to date with the going on's in the 'Buffy' universe but this story did a great job of catching me up pretty quickly despite the fact that I had missed some pretty major changes.

Gage really manages to stay true to the characters created by Joss Whedon, while at the same time putting his own spin on the people we all know and love as fans.  I'll definitely be finding more of Gage's work because each time I read his stories, they just seem to get better each time.

However, the art really lets this story down big time for the most part.  It comes across as quite simplistic in places.  It's not awful artwork, far from it but it just doesn't seem suited to the story.  It's a dark story with some fabulous character development but the art just doesn't live up to the writing and that's a real shame.  It redeems itself slightly near the end when David Lapham takes over the art duties on the second part of 'Hero in His Own Story' but by then, it's already been quite a let down.

For 'Buffty' and 'Angel' fans, there are a lot of things to really like.  The characters we love are all there and they're in a very exciting, action packed story full of major developments character wise.  It's definitely worth looking past the art and enjoying the story itself by Christos Gage.

Posted by Pat Scattergood at 15:07