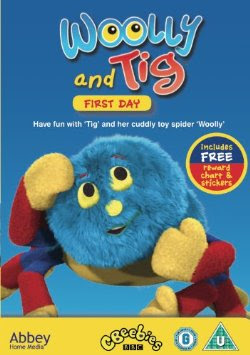 Colin McCredie, from television's 'Woolly and Tig' has kindly popped in to Curiosity of a Social Misfit to talk to Patrick Challis about the show and lot's more.

PC:  You are perhaps well known for your appearances in 'Shallow Grave'  and in the television series 'Taggart'.  How did you appearing in 'Woolly and Tig', the new CBeebies show, come about?

CM:  Maisie (who narrates the show) & Betsy both go to drama classes at the Scottish Youth Theatre and Tattiemoon who made Balamory & Me Too came along to look for a little girl to film the pilot episode of a potential series called "Woolly".


Brian Jameson the creator loved both the girls but felt Maisie was too old but Betsy was just right.
At this point it was only one day's filming so we were quite happy for Betsy to do it.

Once they found out I was Betsy's Dad it made sense for me to be the Dad too. Although it meant actor Mark Cox who had due to be the Dad lost out, and he doesn't let me forget it!! He has appeared in 3 episodes as the Clown, Waiter & Party entertainer!

Once we'd filmed the pilot episode (One Step at a Time) Brian then asked if Maisie would do the narration which makes sense as it's meant to be Tig when she's older.

The pilot episode was sent to CBeebies and they commissioned the first 30 episodes.

PC:  Betsy McCredie, your real life daughter, plays Tig in the show.   What's it like working with your family?

CM:  It's a bit strange as normally most people go to work to escape their family!! It can be a bit stressful as I am always worrying and looking out for Betsy. You also have to be careful not to swear. The upside is that in 30 years time it will be a lovely record of what we were all like!

PC:   Are any of the stories based on your real life experiences as a father at all?

CM:  All the episodes are written by Brian Jameson who used to be a presenter on Play School ( I grew up watching him) before he moved into making programmes. Now that we all know the format of the show, all of us now suggest ideas to Brian about what could make realistic and challenging situations, even Betsy chips in!

PC:  Working with your family looks like it makes the show a lot of fun to make.  Do you have any funny  stories that stem from that?

CM:  Jenny Ryan who plays the Mum is actually my brother's partner and is Betsy's Aunt which was one of the reasons we pushed for her to play the Mum. However, this can cos great confusion when we are all out and I'm with Simone (my wife & the girls Mum)! We often get disapproving looks from parents!!

PC:  You are also well known for your theatre work.  What have been your favourite roles so far?

CM:  I do enjoy theatre very much! In the past 6 months I have been in a play about the disgraced politician Tommy Sheridan at the Edinburgh Fringe, played Dandini in Panto and played an "alleged rapist" in a more adult play. So the best thing about theatre is that you get far more challenging & diverse parts.

PC:  How did becoming a patron of the Scottish Youth Theatre come about?

CM:  As a 12 year old I attended their Summer Theatre Festival and then again when 15 & 16. I absolutely loved it 5 weeks of workshops, rehearsing and putting on a play. Then when I was 17 we won a competition to perform a play at  the Olivier Theatre at the National Theatre in London! If it wasn't for SYT I would never have become an actor. Things have come full circle with the girls going there too. It was an honour to ask to be a patron and thanks to them that we are all doing Woolly & Tig!

PC:  So what's next for Colin McCredie?

CM:  Waiting for the phone to ring!! Hopefully a couple of theatre projects, a film in Shetland called "Between Weathers" and Series 3 of Woolly & Tig (fingers crossed!)!!

PC:  Thank you very much McCredie for talking to us here today, it's been a pleasure.
Posted by Pat Scattergood at 11:06