Web of the City by Harlan Ellison Review 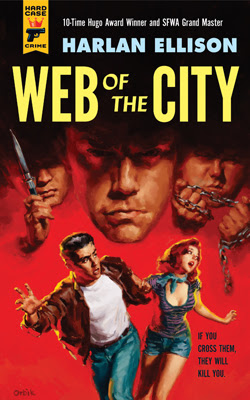 The definitive edition of Harlan Ellisons first novel, returning to bookstores for the first time in 30 years. A harrowing story of gang violence on the streets of New York partly inspired by Ellisons own real-life experiences going undercover as a gang member in the 1950s.

Originally 'Web of the City' was called 'Rumble' when it was released but when it was renamed, it became both controversial and popular with readers.

Now reappearing in print for the first time in over 30 years, the debut novel by the legendary Harlan Ellison is bound to find many new fans.

The stark and cynical writing style of Ellison is definitely present here.  It's true that it's not the polished, hard hitting style that he came to be known for but the ingredients are all here.

Character wise, it's as if they have stepped out of a movie such as 'Rebel Without A Cause' and really feel alive.  In fact, it's almost as if you are there with the characters themselves watching the events of the novel unfold before your very eyes.

At times a bit heavy handed and lurid, this is a hard hitting and violent novel written by Ellison after he went under cover with a gang in real life to research ideas for a novel.  Those ten weeks of Hell were then turned in to this, at times, brutal novel.

There is a hell of a lot of violence, drug use, sex and rape.  For it's time that was relatively untold of, especially at this level.  However, that doesn't over tint what is essentially a very important book in the crime genre.  In fact, this novel is one of the ones that brought the hard boiled crime genre to people's attention.  I would even go so far as to say it's a highly influential book but I wouldn't recommend it for the easily offended or faint hearted amongst us.

A lot of the story reads as quite biographical due to the nature  in which the writing of it came about but it's the vivid descriptions of the city and how the main character, Rusty, feels about the things going on around him, that really shine through.

While it is true that some parts of the story come across as quite dated, this novel is incredibly compelling, exciting and also addictive in a page turner kind of way.  There is also a quite creepy feel to proceedings as well and that really adds the sense of dread that the reader feels while reading about Rusty's life and surroundings.

Also included in this release are three stories by Ellison from the 1950's that share the same theme, which are all very good.  I also loved the introduction to the book as well.  I love seeing little touches like that as a reader but as a fan, I thought that they were brilliant additions.

I would be remiss if I didn't mention the superb cover that really stays in theme with the book itself.  Superb, the cover definitely shows the reader what to expect when they pick up the book.

This book is an absolute classic despite a couple of flaws and I have marked it as such.  It is quite a brutal and lurid story but the writing itself is very well done.  However it does fall in to melodrama a couple of times but that's just done to the simple fact that this was Ellison's debut novel.

Well worth picking  up to see how the legendary Ellison's career started.