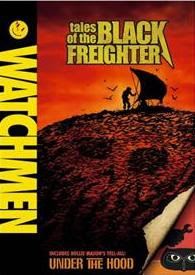 The story within a story of Watchmen, Tales Of The Black Freighter is a gruesome 25 minute manga-style CG animated pirate story, following the lone survivor of an attacked vessel (Gerard Butler) and his desperate journey to safely return home.

Based on the comic book within the Watchmen universe, it is an example of post-modern Metafiction and a comic-within-a-comic that also serves as a foil for the main plot.

As a massive fan of the 'Watchmen' movie and of the graphic novel as well, I was quite disappointed that nothing had been made with the dark, brooding storyline based around the black freighter.

That's when I found this release and it was worth every single minute.

The dark, brooding and psychological tale the bridged the various parts of the graphic novel are now here in all their glory.  Animation wise, this is absolutely superb and even though it's violent and gore filled, it still manages to be insanely beautiful at the same time so kudos to the animators.

Also the writing keeps this tale as true to the one originally written by Alan Moore as possible and it's all the better for it.  The psychological aspect is well written and the descent in to madness incredibly well done.  A lot of that is down to Gerald Butler's great portrayal and voice work as The Sea Captain.

Special features wise, there is a hell of a lot for 'Watchmen' fans to be excited about.  The best of these by far is the feature named 'Under the Hood' that tells a straight story behind how the hooded adventurers came in to existence.  There are so many small details and little surprises that there really is something for all the 'Watchmen' fans out there.  The rest of the special features are very interesting and full of so many behind the scenes moments that the inner geek inside me practically jumped up and down with excitement.

For a 'Watchmen' fan, this is a fantastically essential purchase and full of little gems that both surprise and entertain.  Could you want anymore?

Posted by Pat Scattergood at 15:41