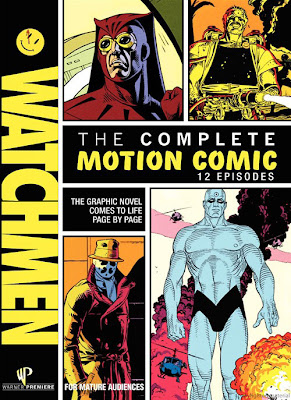 All Characters Voiced By Tom Stechschulte

Watched any great books lately? Now you can. The most celebrated graphic novel of all time that broke the conventional mold continues to break new ground.

All 12 chapters of the story are here nearly 5 hours spanning everything from the mysterious demise of the Comedian to the crisscrossed destinies of loosely allied superheroes to their fateful impact on the world. Be in the know. Be watching. With Watchmen: The Complete Motion Comic.

'The Watchmen' comic book series and graphic novel is rightfully known as being one of the best in the history of comic books.  Both subversive and bitingly satirical while packed with slow burning twists and turns, Alan Moore and David Gibbons really crafted an absolute comic book masterpiece.

Here, Warner Brothers have put together the complete comic book series, added some limited motion and effects as well as voice acting to create a living breathing motion comic book but does it work?

Yes indeed it does.

This release has been put together as if by a fan of the series itself.  No stone is left unturned story wise and the characters are all exactly how they would be in the comic book.  In fact, it's almost as if you are reading the stories yourself only with the added extra of the animation.

There are some great touches here such as the small details such as the rain hitting the windows, cigarette smoke and the such that all add to the general atmosphere of the story itself.

The one major thing that was changed from the comic books are how the panels are positioned.  In the comic books and the graphic novel, they were set out in an unconventional way but here, that's completely lost in this release but that doesn't affect the story however.

All of the characters here are voiced by one person, an actor named Tom Stechschulte.  His deep voiced performance does become slightly jarring at first but the further in to the story you get, the more you get used to it.

The art / animated seems crude at first but it's completely in keeping with the now classic art work in the original comic books and graphic novel.

Weirdly Alan Moore's name seems very conspicuous by it's absence from this release.  However, the additional bits of art were done by Gibbon's himself so at least there is that.

While a good release and one that is very faithful to the original, it's also a bit of a redundant one.  If you have the graphic novel or even the movie itself, then you don't really need to get this.  At the same time, it is very well made so maybe one for the fans out there that just have to have every facet of the 'Watchmen' universe.